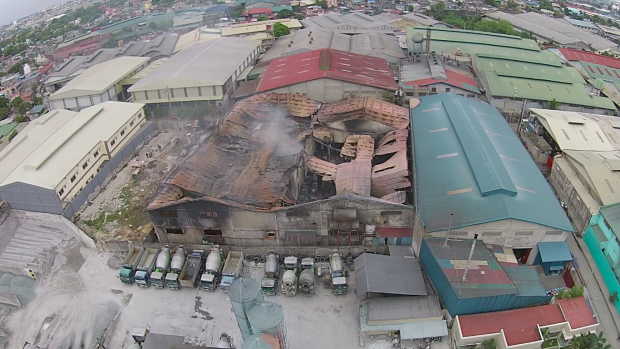 Aerial shot of the Kentex Factory in Valenzuela City, two days after it was gutted by fire on May 13. Screengrab of video by Rem Zamora/INQUIRER

A labor group on Saturday warned that many workers could lose their jobs if the government will insist on withholding business permits of companies unable to secure Fire Safety Inspection Certificates (FSICs).

Last Monday, President Benigno Aquino III held a press conference on the fire that killed 72 workers of Kentex Manufacturing Corporation in Valenzuela. He reiterated that companies need FSICs before being given a business operating permit.

But Kilusang Mayo Uno (KMU) said, “Out of the 295,885 registered establishments in Metro Manila, only 43,788 or less than 15 per cent have been given FSIC’s by the Bureau of Fire Protection (BFP).”

“We fear that this policy would mean massive layoffs for us workers,” it added.

KMU chairperson Elmer Labog said that while Aquino has been holding the local government responsible, “He also wants to shield top officials of national government agencies like the BFP (Bureau of Fire and Protection) and the Department of Labor and Employment from blame for the incident.”

“He wants to make the point that national government agencies are without fault with regard to the death of many workers,” Labog said.

But the KMU chairperson pointed out that the Department of Labor and Employment earlier granted Kentex a certificate compliance on occupational health and safety standards despite the BFP’s refusal to grant it an FSIC.

Instead, he said the “slow pace with which the BFP is issuing FSICs” should be investigated.

“We believe that Aquino’s ‘No FSIC, no business permit’ policy would not result in safer workplaces for workers. We want workers to keep their jobs but we also want safer workplaces. We believe that these twin objectives will be met if the inspection capacity of the BFP and the DOLE is enhanced,” Labog explained.

While Aquino said the DOLE and the Department of Social Welfare and Development will assist workers as their workplaces are shut down, pending the issuance of an FSIC, Labog said the workers should be given full wages instead.

Labog called for the resignation of DOLE and BFP officials responsible for the oversight involving Kente. He also urged local businessmen to protest against the “No FSIC, no business permit” policy.

“We believe that this policy would adversely affect small Filipino businessmen already reeling from high power and water rates, high taxes and kickbacks, trade liberalization and smuggling, and competition from big foreign and local capitalists,” he said.