Aquino echoes late mother in message of friendship to Japan 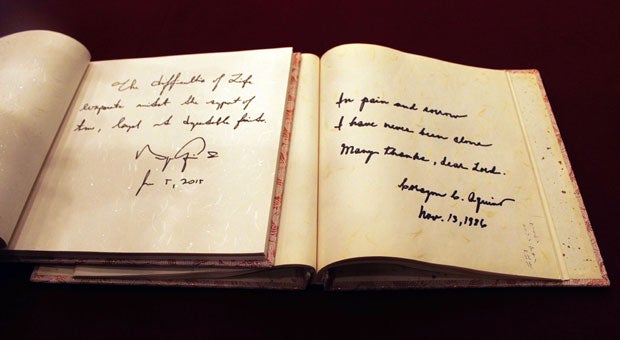 On the last day of his state visit, President Benigno Aquino III on Friday left a message of friendship to Japan at Nippon Press Center, echoing the message of his mother former President Corazon Aquino 29 years ago.

In what seemed to be a reference to the deepening ties between the Philippines and Japan, Aquino highlighted the significant role that loyal friends play in dealing with life’s hardships in his inscription on the guestbook of Japan National Press Club.

“The difficulties of life evaporate amidst the support of true, loyal and dependable friends,” the President wrote.

The press club showed Aquino his late mother’s message signed on Nov. 13, 1986, in the same Tokyo building, which had the same theme of friendship: “For pain and sorrow I have never been alone. Many thanks, dear Lord.”

In a speech on Wednesday before a joint session of the National Diet, Aquino underscored the stronger bond between the Philippines and Japan after World War II, citing the latter’s contributions to the country’s risk reduction and economic development.

“The war was devastating for all of us; there was bitterness on all sides for the suffering that occurred. However, from its ashes, the relationship between our peoples was reborn like a phoenix,” he said.

READ: Aquino: PH-Japan ties as strong as ever despite World War II

Japan is the only country with which the Philippines has inked a bilateral free agreement, and one of its only two strategic partners. RC

Japan agrees to beef up PH military with hardware