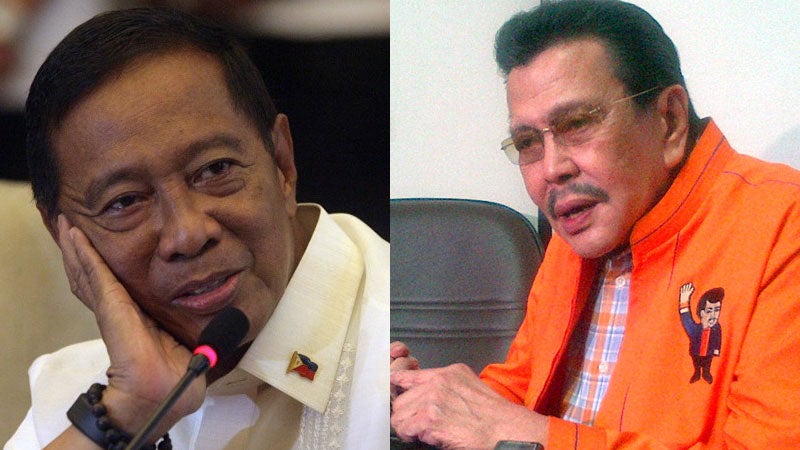 Vice President Jejomar Binay on Friday raised the possibility of running again with former President and Manila Mayor Joseph Estrada but this time, the latter would be his running mate in 2016.

“Hindi na Erap-Binay, Binay-Erap na. ‘Yun, ang tawag doon “BEST”. Alam mo anong “BEST”? BINAY-ESTRADA,” said Binay of the portmanteau in an interview in Biliran this Friday, a copy of the transcript was furnished to reporters by his office.

(It’s not Erap-Binay, but it’s going to be Binay-Erap. It’s called “BEST.” You know what is BEST? It’s Binay-Estrada.)

The Vice President confirmed that he and Estrada met last May 31 but said they did not talk about the possible team up in 2016.

But when asked if Estrada was among those being considered as his running mate next year, Binay said, “Oo. We have a search committee na talagang naghahanap ng magiging katambal ko.”

(Yes. We have a search committee that is particularly looking for my running mate)

And the Vice President thinks Estrada was okay with the idea of running with him.

READ: Binay on Estrada backing Poe: He must be joking

“Ang talagang sinabi niya kami ay magkakasama sa eleksyon sa 2016 (What he really said was we would be together in the 2016 elections),” he further said. IDL

Read Next
Aquino OKs creation of Negros Island Region
EDITORS' PICK
Heads may roll at BOC, says Palace if sugar smugglers are allowed to use recycled import permits
What to watch out for when selecting a video surveillance solution
DOH reports increase in daily COVID-19 deaths, mostly unvaxxed
House energy committee chair Arroyo bats for cheap electricity
vivo brings to the Philippines a powerful smartphone with a slimmer body, the vivo Y02s for only PHP 6,499
Palace: Biggest supermarkets in PH commit to sell sugar at P70 per kilo
MOST READ
Brian Poe-Llamanzares receives his PhD in Public Administration
Peso loses ground vs US dollar
Alyssa Valdez to miss Creamline’s AVC Cup campaign
Metro Manila’s No. 1 wanted man arrested, says NCRPO
Don't miss out on the latest news and information.