Escudero: It’s not yet my time to be President 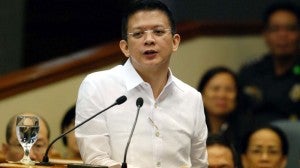 If ever he will run in 2016, it will probably be for Vice President and not President, Sen. Francis Escudero said on Wednesday.

He was quick to stress, however, that he had not yet made up his mind about running or not.

Speaking in an interview on Radyo Inquirer, Escudero said he had no plan of running for President.

“It’s not my time. Maybe that time will come, or it will not,” he said.

“If ever I will consider running for higher office, it may be for Vice President… But that is not yet a decision. What I said was that I am still weighing (my options),” he added.

Asked in a talk with Senate reporters why he was considering a run for the vice presidency and not the presidency, Escudero said anybody could dream, but the dream had to be grounded on reality.

Escudero also said he had not received any offer to be anybody’s running mate in next year’s presidential election.

“My phone is usually silent. Nobody’s calling,” he added.

Escudero has admitted that he and Sen. Grace Poe, who is fast emerging as a potential candidate for President, have discussed the idea of running together in 2016 but that they have no final decision yet.

He said he and Poe could take their time in making a decision because unlike other potential candidates, they were independent and thus had a lot to take into consideration.

As for the call of Sen. Nancy Binay that those who signed the Senate blue ribbon subcommittee report against her father should declare their motives and say if they are running in 2016 or not, Escudero said she should not force those who were still studying their options to decide at once just because her father declared his election plans early.

“Declaring an intention to run or not to run in the forthcoming elections is a personal matter, one that cannot be dictated or forced on anyone, especially by a declared candidate,” he said.

Senator Binay said Wednesday that her colleagues should be “frank and honest,” noting that some of them play coy about their political plans but act as if they were already candidates.

She said it would be better for those who would run to announce their plans so that their competence and track record could be discussed.