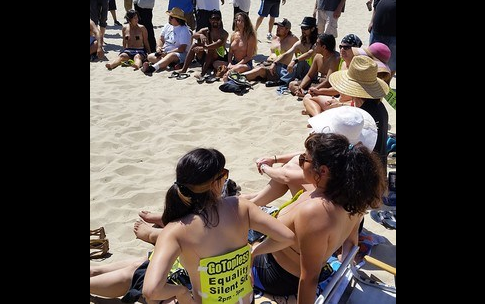 RABAT, Morocco — Moroccan authorities on Tuesday arrested and then expelled two French activists for appearing topless at a historic site in the capital protesting the treatment of gays.

The Interior Ministry issued a statement saying the women had been expelled and were banned from the country because of provocative acts “offensive to Moroccan society.”

“Those involved were arrested by the police of Rabat International Airport following the filming of obscene sequences at the Tour Hassan esplanade,” the statement said, referring to a historic site in the capital.

News reports have said the women were with the Femen activist group.

The women appeared early Tuesday at the Tour Hassan site, which features a half-built minaret from the 12th century and the tomb of King Mohammed V.

The couple then stripped to the waist in the presence of a number of journalists and kissed while showing off naked torsos emblazoned with “in gay we trust.” Security forces weren’t present at the time.

Homosexuality is against the law in Morocco and periodically people are jailed for it, though like the laws against alcohol and sex outside marriage, it is not generally enforced.

Femen has orchestrated a number of topless protests in Europe, and this was not their first protest in North Africa. In 2013, three Femen activists protested topless in front of a courthouse in Tunisia over the imprisonment of a Tunisian member of their group.

The women were convicted on obscenity charges and sentenced to four months in prison. Their sentences were suspended on appeal and they were expelled from the country.