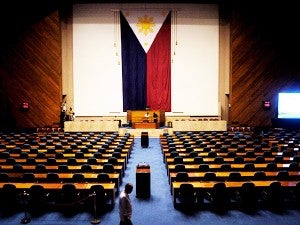 No fireworks marked the first day of the plenary debates in the House of Representatives on the proposed Bangsamoro law.

The plenary session on the Bangsamoro bill was suspended after only two and a half hours, with only House Minority Leader Ronaldo Zamora and Camarines Sur (1st district) Rep. Rolando Andaya having interpellated the bill’s principal sponsor, Cagayan De Oro Rep. Rufus Rodriguez.

With only eight working days left before Congress adjourns, about 30 lawmakers have prepared to debate with those sponsoring the proposed Bangsamoro law.

Zamora started the plenary debates rolling Tuesday night, as 197 lawmakers showed up to make a quorum and prevent the plenary session from being suspended again as what happened Monday.

Zamora raised violations of House rules during the passage of the bill in the committee level and warned that the final law should conform with the Constitution.

But he did not debate with Rodriguez on which specific provisions he perceived to be unconstitutional.

Rodriguez said the Bangsamoro government could only adopt an official emblem and not a flag because a flag would connote a nation. To this Zamora said even emblems could be perceived as flags.

Zamora also expressed misgivings about the possibility of Palawan being later included in the proposed Bangsamoro autonomous region.

“The peace panel said we must pass it because the alternative is war … But doing what is right, should that not be the principle that guides us now?” he added.

The plenary session on Tuesday started at 4 p.m., but the interpellation did not start until an hour and a half later when a roll call was made after Buhay party list Rep. Lito Atienza questioned the quorum again.

After two hours, Zamora gave way to Camarines Sur (1st district) Rep. Rolando Andaya who pointed out technical requirements for the automatic allocation for the annual block grant and capital outlay to the Bangsamoro region.

But after a few minutes, the session was suspended again to avert a question of whether a quorum still existed since most of the lawmakers had left the plenary hall.

By 7:45 p.m., further interpellation on the Bangsamoro bill was suspended until the next day.

It remained to be seen whether the House leadership could continue to muster not only a quorum but support from the majority of the 289-member House to meet Malacañang’s June 11 timetable to pass the law.

House Majority Leader and Mandaluyong Rep. Neptali Gonzales II admitted last week he had doubts the House could pass the law before Congress’ adjournment on June 11.

Even if the House holds additional session days during all the working days left until June 11, there will still be not enough time to finish the lengthy debates, according to Gonzales.

Congress will resume sessions on July 27, when the President reportedly wanted to include the approval of the Bangsamoro law in his final State of the Nation Address.