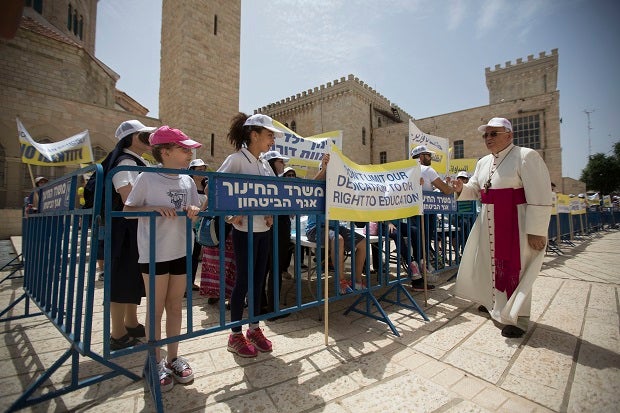 In this photo taken Wednesday, May 27, 2014, Bishop of Nazareth and Galilee, Boulos Mar Cuzzo, right, and Arab Israeli Christians attend a demonstration in front of the education ministry in Jerusalem. Private Christian schools are among Israels highest ranked educational institutions, established by churches in the Holy Land hundreds of years ago long before Israel was established. But school administrators are accusing Israel of slashing their funding as a pressure tactic to get them join the Israeli public school system a move they say would interfere with the schools Christian values and high academic achievements. AP

JERUSALEM — Israeli police say they forcibly removed dozens of Jewish protesters trying to prevent a Christian ritual from taking place at a holy site revered in both religions.

Police spokeswoman Luba Samri says the skirmish took place Monday at a site revered by Jews as the tomb of the biblical King David and by Christians as the site of Jesus’ Last Supper.

On Sunday, dozens of Jewish protesters also attempted to block Christian prayer there for the holiday of Pentecost.

A status-quo arrangement permits Christian prayer at the site on specific holidays. The Vatican is lobbying Israel for more access to the site, which fundamentalist Jewish Israelis oppose.

The Custodia of Terra Santa, a Vatican representative in Jerusalem, said the events were “grave.”