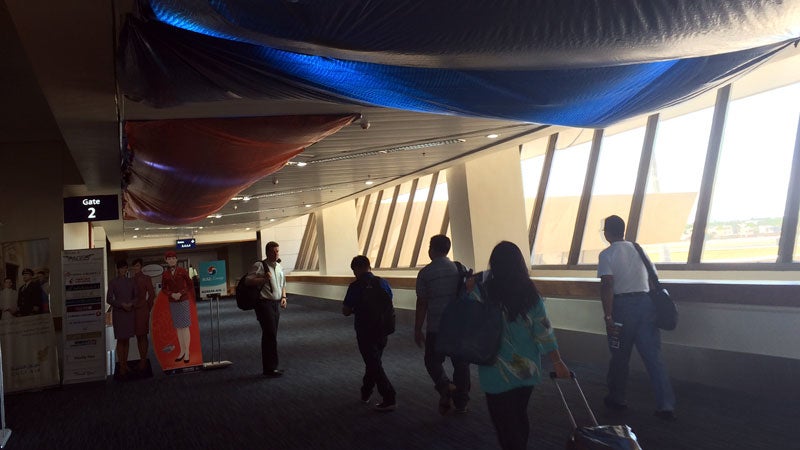 DM Consunji Inc. (DMCI), which owned up to causing the ceiling leaks, has apologized for inconveniencing passengers and airline personnel who had to slog through the east and west concourses of the departure area. The firm said it would shoulder the cost of repairs.

According to Naia Terminal 1 Manager Dante Basanta, DMCI had stripped off the existing waterproofing over the east and west concourses in order to apply carbon fiber reinforced polymer (CFRP).

CFRP is intended for the structural retrofitting of the pathways to the preboarding areas.

Basanta said DMCI worked on five segments, stripping off the waterproofing, and apparently it did not expect that it would rain, it being summer with the temperatures at the high end.

Contractor JEDD Technologies, which was in charge of the waterproofing work, was supposed to come in after DMCI completed the CFRP application, Basanta told the Inquirer.

“But then it rained on May 27, so the water seeped through to the concourses,” he said.

He said the MIAA had directed DMCI “to take stopgap measures to anticipate the rain and see to it that they prevent it (ceiling leaks) from recurring.”

In a report submitted to the Miaa on May 27, DMCI’s project safety head said that “due to (the) large volume of rain caused by flash flooding near areas that overtopped the concrete zocallo that we provided… the rainwater poured (into) the area for concreting thereby causing the leaks in the east and west concourses.”

Simply, the heavy rainfall caused the ceiling over the concourses to leak and the measure DMCI took to prevent such an occurrence failed.

On Monday, the east and west concourses still had tarpaulin covering the ceiling as a temporary measure to protect passengers from the rain.

There were still trash cans placed around the preboarding areas to catch raindrops.

The leaking ceiling became apparent last Wednesday when a thunderstorm struck over Pasay City and the concourses became drenched. Passengers had to be assisted by airline employees holding up umbrellas as they made their way through the departure concourses.

Passengers should bring umbrellas to Naia 1