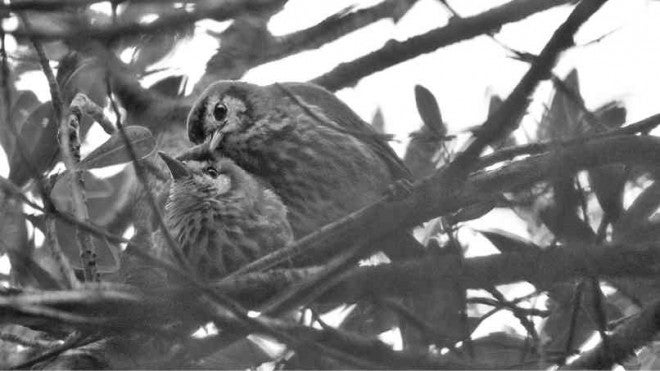 ELUSIVE AND ENDEMIC The Panay Striped Babbler, locally called “maradyang,” are found only in the forest fastness of the Madja-as mountain range in northern Panay. RUPERT QUITAG/CONTRIBUTOR

CULASI, Antique—For a few seconds, the pair of elusive feathered creatures appeared, chirping from a tree branch somewhere in the forest fastness of Mount Madja-as.

“It was a rare encounter,” Detchie Gaad, who was with a team of the Panay Bird Club, said of the “maradyang,” a bird species that is endemic only to Panay Island in Western Visayas.

The majestic Madja-as, mountain ranges of Culasi town in Antique province, 2,113 meters above sea level (masl), is the home of the most diverse flora and fauna, some already in a critically endangered situation. It is dubbed one of the last frontiers of Panay and considered by mountaineers one of the toughest climbs in the country.

The Panay Bird Club visited Madja-as “not only to explore the hidden natural treasures of the unspoiled rainforest but to document the maradyang,” according to Ruperto Quitag, its cofounder.

Only a few scientists have surveyed the species found in Madja-as and the two other peaks—Mount Nangtud (2,117 masl) and Mount Baloy (2,080 masl)—in the vulnerable mountain ranges of Antique. Interestingly, other people have started to document the flora and fauna that might interest them for future entries in scientific publications.

Locally known as maradyang, the Panay Striped Babbler (Stachyris latistriata) has been sighted only in 1987. Generally, the bird is cream white in color, adorned with black lines, and an olive yellow belly that stands out.

“These noisy birds are difficult to see,” according to Robert Kennedy in his book “A Guide to the Birds of the Philippines.”

“This bird species is confined in mossy forest 1,000 meters above sea level where it may forage at all heights within the forest. Usually found singly or in pairs, but may travel in flocks,” he added.

The maradyang is endemic to Panay and has an extremely small range, its habitat known to be on the slopes of just two mountains. Although not currently threatened, the refuge should be monitored carefully for the effects of land-use changes within populated areas.

Though the International Union for Conservation of Nature (IUCN) has classified the bird as “near threatened,” meaning threatened with extinction in the near future, much attention is needed to protect and conserve Madja-as.

Quitag and his team embarked on the Madja-as expedition on May 8-11, 2014, and, for the first time, documented a mother maradyang and her juvenile in the wild, according to John Sumanting, municipal information and tourism officer of Culasi.

They confirmed the local name of the bird from Joswe Alejo, the most sought-after forest guide of Barangay (village) Flores, Culasi. The name had never been mentioned or identified in any literature or write-up about birds in the Philippines.

“I have been to Mt. Madja-as more than 300 times already and sometimes, I see these birds travel in flocks,” Tatay Joswe was quoted as saying in Kinaray-a. “It makes me happy to know that these birds can only be found here in Panay. That means it is so unique and valuable.”

Quitag said the team had reached the dense rainforest at 1,370 masl when the guide pointed at the maradyang.

“The first encounter was quick since the bird flew fast when it noticed us,” he said. “As we entered the mossy rainforest (1,750 masl), we heard the same bird sound.”

The birds were responding to “squeaking” or “pishing,” but they usually appeared for a few seconds. Their chirping lasted one to two seconds, repeated about 10 times a minute.

“We were excited to watch the mother and its juvenile hop from one branch to another. This time, the mother bird did not fly since she had to protect her juvenile,” Quitag said.

“Nong Rupert had the chance to take good photos as they bonded with one another. We were only 3-4 meters away,” Gaad said.

Mayor Joel Lomugdang said the municipality was making its move to declare Madja-as as a natural park.

“In this way, these endangered species will not likely be affected by the wholesale clearance of forest habitats as a result of logging, hunting of these animals, clearing (‘kaingin’) for agricultural conversion and mining activities occurring within the range,” Lomugdang said.

Marcos Caratao, one of the travel bloggers who joined a recent exploration to the peak, described his experience at seeing the maradyang as “life-changing.”

“I just hope that the local government and the community will take part to protect them,” he said.