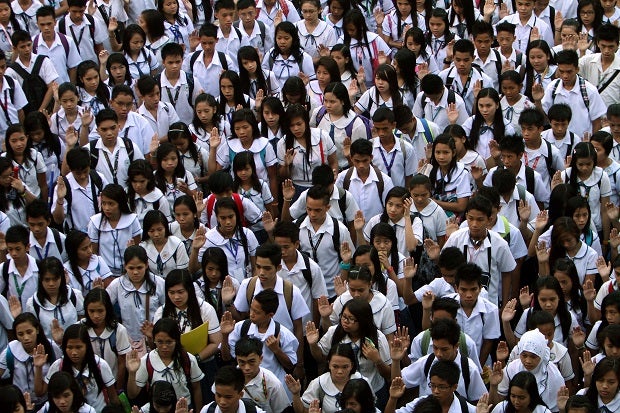 A humid day with likely thunderstorms in the afternoon and protests by a group of teachers seeking the suspension of the K-12 (kindergarten to Grade 12) program will greet 23 million students expected to attend Monday’s opening of classes in 46,624 public elementary and high schools nationwide.

Many students also face a lack of classrooms and teachers in certain areas, while others have to deal with the threat of a 7.2-magnitude earthquake from the movement anytime of the 100-kilometer West Valley Fault.

Malacañang assured the people that all public elementary and high schools, including those sitting on the fault line, were doing their part to comply with the government’s safety standards for infrastructure.

Communications Secretary Herminio Coloma Jr. on Sunday said schools in the West Valley Fault area “are continuously being inspected by the authorities to ensure the safety of students and teachers.”

On Monday, Pedro E. Diaz High School in Muntinlupa City is “scheduled for inspection to check the facility’s structural integrity, among others,” Coloma said.

Assistant Education Secretary Jesus Mateo said schools earlier identified to be within the 5-meter buffer zone on both sides of the fault line had informed parents of the safety precautions they had set in place for the students.

Monday’s opening of classes will signal the start of the formal implementation of the K-12 program, which Coloma called “one of the pillars of the Aquino administration’s reforms in the education sector.”

Quoting President Aquino, he said that with the program, “we ensure that our youth have the knowledge and skills when they finish high school so that they can be productive members of society.”

The 120,000-strong Alliance of Concerned Teachers (ACT) has been calling for the suspension of the K-12 program, which adds two years to the country’s 10-year basic education curriculum, aside from raising the issues of classroom shortage and salary increases for public school teachers.

“[The country] does not need [the K-to-12 program] to achieve quality education. It can’t be defined only through the number of years [in school] because issues, such as the lack of learning materials, classrooms and health and sanitation facilities, should first be addressed,” ACT’s Raymond Basilio told the Inquirer.

The group assured parents that the classes of their children would not be disrupted by the protests.

Basilio noted that recent data the group had gathered showed that the country lacked more than 112,000 classrooms and close to 24 million textbooks and teachers’ manuals.

Mateo, however, maintained that based on the government’s own data, the country had no shortage in textbooks and classrooms.

From July 2010 to December 2013, the DepEd built 66,813 classrooms. Last year, 33,608 classrooms were built, while an additional 41,728 are proposed to be constructed this year, according to the education official.

In select areas in Metro Manila, Mateo said “the lack of buildable space” was one reason the DepEd couldn’t build more classrooms.

There are more than 770 public elementary and high schools in Metro Manila, with nearly 2 million students enrolled during the 2014-15 school year.

Coloma noted that the DepEd had been attending to the needs of public schools.

“In 2012, the government managed to provide the 61.7 million textbooks and 2.5 million chairs needed by these schools. Last year, up to 33,607 additional classrooms were put up with 31,278 more classrooms to be constructed shortly,” he said.

In the Visayas, at least 7,162 teachers are needed this school year as school officials gear for the full implementation of the K-12 program in 2016, according to DepEd officials. They include 3,011 teachers in Eastern Visayas, 2,400 in Cebu province, and 1,751 in Western Visayas.

Mercy Sarmiento, DepEd information officer for Eastern Visayas, said 3,011 new teachers should be hired to improve the quality of education so that a fewer number of students would be handled by a teacher. At present, there are 24,377 teachers in the elementary level in Eastern Visayas and 10,125 teachers in the secondary level.

The DepEd regional office expects more than 720,000 pupils to enroll in the elementary level and more than 323,000 students in the secondary level.

In Western Visayas, the DepEd is waiting for funding from the Department of Budget and Management for the hiring of 1,751 teachers with a rank of Teacher I—717 in Negros Occidental, 481 in Iloilo, 210 in Antique, 192 in Aklan, 116 in Capiz and 35 in Guimaras.

As schoolchildren go back to school, the weather bureau advised parents to give their children umbrellas or raincoats as afternoon rain showers would be more frequent in the coming days.

“In the morning and early afternoon it will be hot and humid. But in the late afternoon and evening, expect thunderstorms,” meteorologist Fernando Cada said.

In a special bulletin for the school opening, the Philippine Atmospheric, Geophysical and Astronomical Services Administration (Pagasa) said the heavy downpour experienced during scorching hot weather was the result of “intense heating.”

Pagasa said the rainy season would start in the middle of June.–With reports from Joey A. Gabieta, Jhunnex Napallacan and Nestor P. Burgos Jr., Inquirer Visayas; and Jaymee T. Gamil in Manila