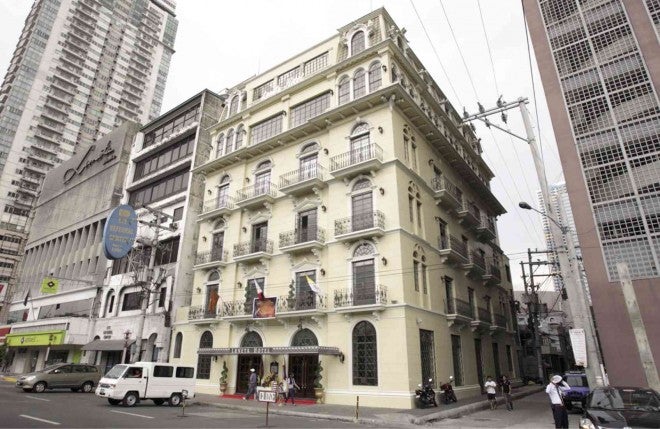 OLD CHARM, NEW ENERGY. Luneta Hotel is one of the preserved architectural gems of the Ermita-Malate district, which Emboa members hope to revive after years of decline. INQUIRER PHOTO/Niño Jesus Orbeta

Those who remember the Ermita and Malate of yesteryears—those swinging nights, the lively art scene, the culinary adventures—know what today’s “gimmick”-seeking generation is missing.

But while it can’t turn back the clock, the local business community is bent on reviving their corner of Manila with collective efforts that started two years ago and are gaining momentum to this day.

The Ermita-Malate Business Owners Association Inc. (Emboa), whose initial projects mostly focused on the more serious matters of peace and order and urban beautification, is moving on to the fun and festive part of its mission.

A grand Santacruzan, for example, will be mounted by the group today as a prelude to more tourism projects like food and heritage tours.

Emboa is an organization of about 130 businesses, whose prominent members include the Manila Hotel, Diamond Hotel, Bayview Park Hotel, Manila Ocean Park and Robinsons Place Manila.

The group seeks to restore Ermita and Malate’s appeal as the place to be for local and foreign tourists. Emboa president Michelle Pe recalled that in the 1970s, the district had a vibe unlike any other, even if compared to other cities in Southeast Asia at the time.

Art by the bay

Back then, Manila Bay not only offered a view of its world-famous sunset but also a breezy, leisurely walk past the stalls of street artists, their works “selling like hotcakes” especially to foreign tourists, Pe added.

Restaurants, like those at Remedios Circle, competed with each other not just through their menus, enticing diners with jazz or opera singers. Street parties never seemed to end, with the bar hoppers making the rounds in high fashion courtesy of Ermita-based designers themselves, like Pitoy Moreno, Aureo Alonzo and Joe Salazar.

But then there was also the red-light strip. Though some would say that it was this side of the Ermita-Malate nightlife that hastened its decline, Pe believes it was still the spreading urban blight and safety concerns on the streets that really turned off patrons.

Hence, the group’s first projects centered on cleaning up the streets, partnering with the police and village officials for better security and finding shelter for the homeless.

“We have seen improvements, and our commitment and partnerships with the police, barangays and residents to maintain the peace and order here are strong. Now, we are focusing on programs that will embody our slogan,’’ Pe said.

That slogan—“Ermita-Malate: Where Excitement Never Stops”—will be bannered today by a Santacruzan procession featuring more than 20 ladies in horse-drawn carriages. Among them are Miss Philippines-Earth 2013 Angelee de los Reyes and winners of beauty pageants held by Manila-based universities.

The parade will start at 2 p.m. at Luneta Hotel and will pass through Kalaw Avenue, Roxas Boulevard, Pedro Gil Street and end at Robinsons Place Manila.

Also being held today is a “heritage food tour” that will include a visit to a private museum inside Ermita Church, which houses the 400-year-old statue of the Nuestra Señora de Guia. Ivan Man Dy, a heritage advocate who regularly hosts tours of Manila’s historic sites, will lead the activity at 3 p.m. on Remedios Circle.

“The district has changed so much through the years, and this will be sort of a journey to rediscover the food treasures that can be found in Ermita and Malate,’’ Pe said.

Later, on the next Sundays of June, the heritage tours will be led by cultural activist and Old Manila tour guide Carlos Celdran.

“The tours are for free but participants are requested to bring simple gifts or tokens for Mr. Celdran. They will cover historic places and buildings in Ermita and Malate, and Mr. Celdran might even have a surprise or two for those who will join,” Pe said.

“We hope that aside from attracting tourists, these activities will inspire other businessmen to put up shop here so that we can really bring back the colorful and festive vibe of Ermita and Malate,” she said.