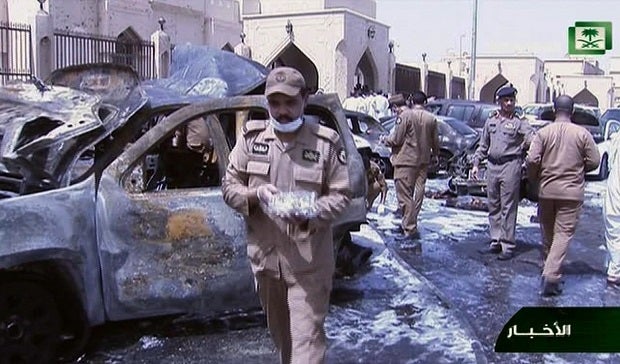 In this still image taken from video provided by Saudi TV, burnt out cars are seen as investigators collect evidence, in the aftermath of a suicide bomb outside the the Imam Hussein mosque in the port city of Dammam, Saudi Arabia, Friday, May 29, 2015. A suicide bomber blew himself up in the parking lot of a Shiite mosque in eastern Saudi Arabia during Friday prayers, killing four people in the second such attack in as many weeks claimed by the Islamic State group. AP

RIYADH, Saudi Arabia — A suicide bomber disguised as a woman blew himself up in the parking lot of a Shiite mosque during Friday prayers, killing four people in the second such attack in as many weeks claimed by the Islamic State group.

The latest attack and a suicide bombing at a Shiite mosque that killed 21 people last Friday appeared aimed at fanning sectarianism and destabilizing the kingdom. Both attacks took place in the oil-rich east, which has a sizable Shiite community that has long complained of discrimination.

The Islamic State group views Shiites as apostates deserving of death and also seeks the overthrow of the Saudi monarchy, which it considers corrupt and illegitimate.

Saudi Arabia had vowed to crack down on the extremists after last week’s bombing, and authorities appeared keen to claim credit for preventing the bomber from entering the Imam Hussein mosque, the only Shiite mosque in the port city of Dammam. The state-run Saudi Press Agency said security guards halted a car in the parking lot and that the bomber detonated his explosives as they approached.

Witnesses said, however, that worshippers had taken their own security measures, including setting up checkpoints, and that young men had detected the bomber and chased him down, leading him to set off the explosion. It was unclear if the bomber was among the four dead.

A security official told The Associated Press that the attacker had disguised himself in the black all-encompassing garments worn by women in Saudi Arabia and blew himself up after being stopped by security guards. He insisted on anonymity because he was not authorized to speak to the media.

Mohammed Idris, a worshipper who witnessed the attack, told the AP by telephone that the suicide bomber attempted to enter the mosque but was chased by young men, who had set up checkpoints at the entrance.

“They chased the suicide bomber when he tried to enter the women’s section of the mosque,” he said.

Another witness, who did not want to be named because of security concerns, said security had been tightened at mosques after last week’s attack and that women were told to stay home because there were not enough female guards to check them.

Body parts were scattered around the area after the explosion, which set four cars ablaze and sent black smoke into the air, said Mohammed al-Saeedi, who arrived half an hour after the blast. He called on police to do a better job of sharing information with the local Shiite community.

The Islamic State group claimed responsibility for the attack, saying it was carried out by its “Najd Province,” referring to a region in the central Arabian Peninsula. Islamic State leader Abu Bakr al-Baghdadi has repeatedly called for attacks on the Saudi kingdom. 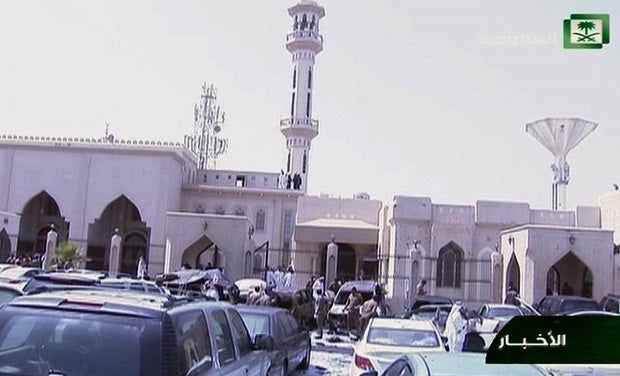 In this still image taken from video provided by Saudi TV, investigators collect evidence at the scene of a suicide bombing, outside the the Imam Hussein mosque, in the port city of Dammam, Saudi Arabia, Friday, May 29, 2015. A suicide bomber blew himself up in the parking lot of a Shiite mosque in eastern Saudi Arabia during Friday prayers, killing four people in the second such attack in as many weeks claimed by the Islamic State group. (Saudi Television via AP) SAUDI ARABIA OUT

A statement posted on a Facebook page used by the extremist group said a “soldier of the caliphate,” identified as Abu Jandal al-Jazrawi, blew himself up among “an evil gathering of those filth in front of one of their shrines in Dammam.” The name al-Jazrawi suggests that the bomber is a Saudi national.

It called on Sunnis to “purify the land of the two shrines from the atheist rafida,” a derogatory term for Shiites.

Last Friday, an Islamic State suicide bomber killed 21 people in the village of al-Qudeeh, in the oil-rich eastern Qatif region. It was the deadliest militant assault in the kingdom in more than a decade. Saudi Arabia’s newly enthroned King Salman vowed to punish those responsible for the “heinous terrorist attack.”

Interior Ministry official Bassam Attiyah said earlier this week that the IS group has divided the kingdom into five self-styled provinces. He said on state TV that the group’s short-term plans are to target the security forces and attack Shiites to foment sectarian strife. Then they plan to target foreigners, including those working in the OPEC member’s oil industry, he said.

“What we are seeing now is the short-term plans,” he said.

Saudi Arabia branded the Islamic State a terrorist group last year and has joined the U.S.-led coalition targeting it in Syria and Iraq. But the kingdom’s powerful clerical establishment continues to espouse a hard-line version of Islam, known as Wahhabism, that views Shiites as heretics.

In the decades before the Sept. 11 attacks, Saudi Arabia had used its vast oil wealth to support jihadi groups across the Muslim world, leading many critics to view the latest attacks as a predictable blowback.

“He who plants thorns must never expect to gather roses. We have planted many thorns,” Saudi writer Turki al-Hamid wrote on Twitter.

Another Saudi writer, Abdullah al-Alami, asked “how many Saudi citizens should get martyred before we purge the screens, the curriculum and the (mosque) podiums … from incitement,” referring to hard-line clerics who host TV programs and deliver weekly sermons across the kingdom.

Shiites in Saudi Arabia have long complained of discrimination, and say their communities have benefited little from the country’s vast oil riches, which are also concentrated in the east.

In 2011, Shiites in the east inspired by the Arab Spring uprising in neighboring Bahrain took to the streets to demand greater rights. Police arrested hundreds of people and a counterterrorism court sentenced an outspoken cleric, Nimr al-Nimr, to death.

Saudi Arabia views Shiite movements elsewhere in the Middle East as proxies of its main regional rival, Shiite-majority Iran. It is currently leading a coalition in bombing raids against Shiite rebels in neighboring Yemen who seized the capital, Sanaa, last year.

The IS group has deftly exploited sectarian conflicts generated by the Saudi-Iranian rivalry, particularly in Syria and Iraq, where it has carried out brutal attacks on Shiites and then portrayed itself as the defender of embattled Sunnis.

Many now fear it will pursue a similar strategy in Saudi Arabia.

Mohammed al-Hajji, a Saudi Shiite activist, called on the government to curb hate speech against Shiites in mosques, schools and the media, warning that the growing IS threat is “bigger than us.”

“ISIS and whoever is behind it is trying to hit Saudi through the minority to create chaos in the region, and to make Saudi vulnerable,” he said.