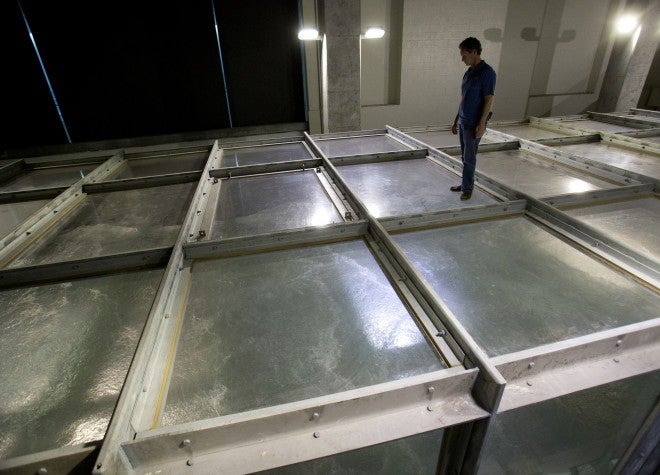 In this Tuesday, April 28, 2015 photo, Brian Haus, director of the Surge-Structure-Atmosphere Interaction, or SUSTAIN, lab, stands atop the storm simulation tank during a demonstration at the University of Miami’s Rosenstiel School of Marine and Atmospheric Science in Miami. (AP Photo/Wilfredo Lee)

MIAMI — Researchers trying to figure out what makes some hurricanes strengthen into catastrophic monsters have a new lab that allows them to generate tropical storm conditions with the flip of a switch.

The lab is at the University of Miami’s Rosenstiel School of Marine and Atmospheric Science. It’s known as the Surge-Structure-Atmosphere Interaction, or SUSTAIN.

The lab features a clear acrylic tank about 75 feet (23 meters) long and 6.5 feet (2 meters) high. Inside, 38,000 gallons of seawater can be whipped into white-capped waves by a 1,700-horsepower fan that can create Category 5 conditions, with winds topping 157 mph.

Satellite sensors have been mounted on the lab’s high ceilings to look down at hurricane conditions churning in the tank. This will help fine-tune satellites watching real storms, said lab director Brian Haus.

“The satellites, even though they see a really big area, they tend to be sensitive to really small things on the surface. We don’t really know, when you get into extreme conditions, what the satellite is seeing — whether there’s a spot reflecting off sea spray or bubbles or short waves,” Haus said.

During a recent test-run, Haus stood atop the tank, his shoes dry and his clothes unruffled while frothy, sea-green waves raced beneath him. He also stood underneath the tank and along its sides, watching sea spray blast bubbles and water droplets down the tank.

By studying the way hurricane-force winds interact with spray coming off the surface of seawater, researchers aim to improve real-time tropical storm observations made by satellites, ocean buoys and drones and other sensors launched from “hurricane hunter” aircraft.

Researchers are testing small drones to fly down into those dark and stormy places, while a variety of other sensors from buoys and underwater gliders and satellites collect data for hurricane forecasting models. All those tools still are prone to technical difficulties in extreme conditions.

Researchers think that understanding the role those tiny elements play in the transfer of energy from the ocean to a storm may crack the mystery of what causes some storms to fizzle while others strengthen.

Predictions for a storm’s path have improved significantly over the last couple decades, narrowing the so-called “cone of uncertainty” that influences preparations. However, forecasters have made little headway when it comes to improving predictions for how strong a tropical storm will become.

Research like the observations in the SUSTAIN lab will be vital to making storm intensity forecasts better, said Rick Knabb, director of the National Hurricane Center in Miami.

“Intensity forecasting, especially rapid intensification and especially when that happens near the coastline — that remains our highest priority forecast improvement need,” Knabb said.