During Napoles’ bail hearing on plunder, principal whistleblower Benhur Luy said Tuason received an advance rebate of P18 million from the Malampaya fund, or royalties from a gas field off Palawan intended for energy projects. 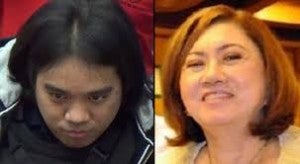 At least P900 million of these funds were supposed to have been used to alleviate the plight of victims of typhoons “Ondoy” and “Pepeng” but these were instead allegedly diverted to 12 bogus Napoles foundations.

Luy said Tuason had received the funds on October 2009 but he said that at time he didn’t know the funds came from the Malampaya.

He said the transaction is subject to investigation by the Ombudsman.

“At the time, we didn’t know the fund came from Malampaya. It’s a DAR (Department of Agrarian Reform) project. We prepared disbursement with regard to the Malampaya,” Luy said.

“At the time, it was not identified by Napoles but we remit the money to Ruby Tuason… I knew to the extent that it’s with DAR. Up to the extent kung sino ang principal, wala po akong alam (Up to the extent of who the principal was, I have no idea),” he added.

Napoles has tagged Tuason as convincing her to convert Malampaya fund proceeds into campaign funds to rake in kickbacks.

Napoles also said Tuason then showed her a list of government funds amounting to P25 billion, and recommended the P900 million Malampaya fund that would be coursed through the Department of Agrarian Reform.

Arroyo was implicated by virtue of an Executive Order she issued authorizing the release of the said energy funds into aid for storm victims.

The scam was allegedly orchestrated by forging the signatures of mayors of cities and municipalities hit by the storms on the memoranda of agreement. Instead of being implemented, all the funds for aid were allegedly spent into ghost projects for kickbacks.

The complaint also implicated Tuason as collecting P242.775 million from Malampaya but for a still unknown recipient.

Tuason has admitted before a Senate hearing as delivering bags of kickbacks to the Senate office of Jinggoy Estrada, who is detained for plunder over the alleged scam of pilfering their Priority Development Assistance Funds (PDAF) to ghost projects for kickbacks.

The hearings over the pork barrel scam have resulted in the detention for plunder of senators Estrada, Ramon Revilla Jr. and Juan Ponce Enrile, as well as former representatives Rizalina Seachon-Lanete and Edgar Valdez.