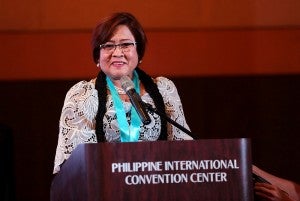 Justice Secretary Leila de Lima on Thursday said she would make her final decision early next week on the filing of complaints against the third batch of politicians implicated in the P10-billion Priority Development Assistance Fund (PDAF) scam.

De Lima said she was still waiting for documents from the National Bureau of Investigation’s Special Task Force (NBI-STF) and its supervisor, Undersecretary Jose Justiniano, that would help her make a final decision on the matter.

“I am still waiting for certain documents that I asked Undersecretary Justiniano and the NBI-STF to prepare as part of the continuation of discussions. Whether or not those documents are submitted within today, [it’s] not possible to hold a meeting today with them. [We will be] resetting to either Monday or Tuesday next week,” she told reporters.

De Lima earlier said she would hold the meeting Thurday and would make an announcement afterward on whether or not the cases would be filed.

De Lima earlier reaped criticism for the delay in the filing of the cases. She said NBI-STF members were having difficulty in determining the authenticity signatures on the PDAF documents and its effect on the cases to be filed.

“They’re raising the issue of the authenticity of their signatures, citing the findings stating that it would appear that in many of those documents, the signatures were not by one and the same person,” she said in an earlier interview.

De Lima said she had asked the STF and Justiniano to study how the findings would affect the strength of the complaints to be transmitted to the Office of the Ombudsman.

“I want them to study if these cases will be given the go signal despite the findings of the NBI on the forgery of signatures in certain documents. Will these be enough, good or valid reason not to proceed with the filing of the cases?” she said.

Among those said to be included in the third batch were Sen. Gregorio “Gringo” Honasan, Technical Education and Skills Development Authority Director General Joel Villanueva and at least two other politicians reportedly planning to run for the Senate next year.

They are among the incumbent and former lawmakers named by several whistle-blowers as having connived with detained businesswoman Janet Lim-Napoles, alleged scam mastermind, to siphon off their PDAF allocations to phony nongovernment organizations.

The complaints will be filed before the Office of the Ombudsman, whose field investigation office would first conduct its own probe to determine probable cause.