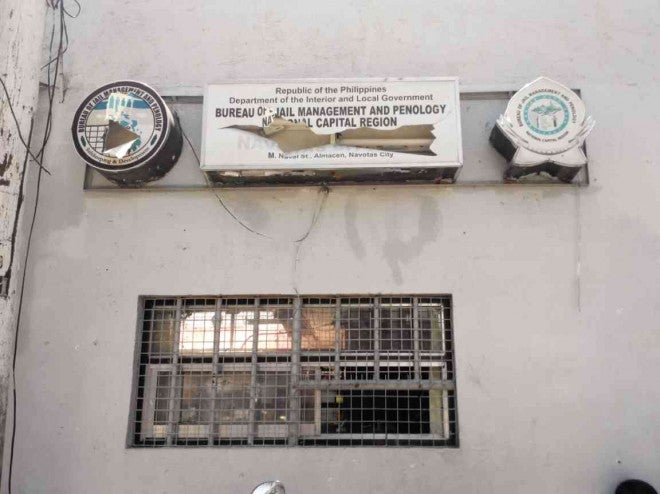 MISTAKEN TARGET? The grenade blast that left a female pedestrian injured also damaged the sign of the Bureau of Jail Management and Penology at the Navotas City Jail on Thursday.  Rima Granali

Two fragmentation grenades were lobbed by a man on a black  motorcycle as he drove past the entrance of the Bureau of Jail  Management and Penology (BJMP) building on Naval Street near the corner of M. De Vera in Barangay (village) Sipac Almasen at 4:30 a.m., police said.

Only one of the grenades exploded and the shrapnel hit Agnes Salinas, 58, in her right thigh, according to the case investigator, PO2 Allan Bangayan.

The woman, who had just left her house near the city jail to buy breakfast, sustained minor injuries and was discharged from the hospital after receiving treatment the same day, Bangayan said.

A witness told the police that a man wearing a motorcycle helmet earlier approached him and asked for the office of a certain “Sir Naic.”

The witness said he did not know Naic but pointed at the nearby offices, including the BJMP’s, which he also described as the office of the Navotas police. As he walked on, the witness later heard a loud explosion.

The blast also damaged the BJMP sign on the building’s facade and shattered a glass window.

In an interview with Radyo Inquirer, Navotas City Mayor John Rey Tiangco said he knows of an officer named Naic in the Northern Police District’s antinarcotics unit and that it was possible that the grenade-thrower mistakenly targeted the BJMP instead of that officer’s station.–With a report from Erwin Aguilon, Radyo Inquirer