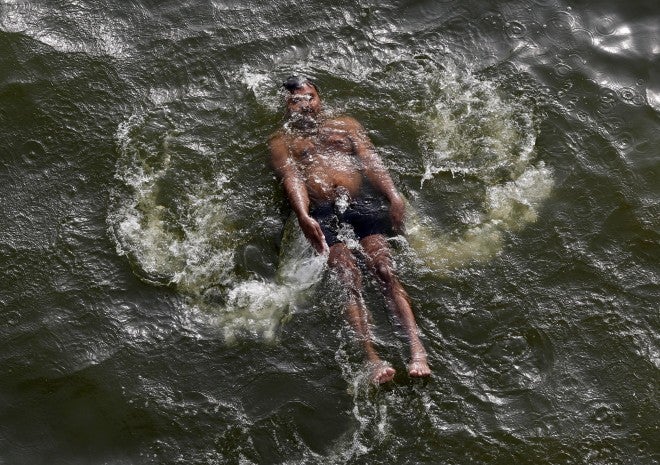 An Indian man swims in the River Yamuna on a hot summer day in Allahabad, India, Wednesday, May 27, 2015. Hundreds of people have died in southern India since the middle of April as soaring summer temperatures scorch the country, officials said Tuesday. AP

HYDERABAD, India — Eating onions, lying in the shade and crowding into rivers, Indians were doing whatever they could Thursday to stay cool amid a brutal heat wave that has killed more than 1,400 in the past month.

Most of the 1,412 heat-related deaths so far have occurred in the southern states of Andhra Pradesh and Telangana, where temperatures have soared up to 47 degrees Celsius (117 degrees Fahrenheit), according to government figures. Among the most vulnerable were the elderly and the poor, many of whom live in slums or farm huts with no access to air conditioners or sometimes even shady trees.

Officials warned people to stay out of the sun, cover their heads and drink plenty of water, but India’s widespread poverty was forcing many to work despite the high temperatures.

“Either we have to work, putting our lives under threat, or we go without food,” said Narasimha, a farmer in the badly hit Nalgonda district of Andhra Pradesh. “But we stop work when it becomes unbearable.”

In the city of Nizamabad, 150 kilometers (93 miles) north of the state capital of Hyderabad, construction workers were also still on the job.

“Our livelihood depends on our work,” said Mahalakshmi, who earns a daily wage of about $3.10. She dismissed the warnings to avoid work. “If I don’t work due to the heat, how will my family survive?”

Those who were able were heeding the government’s advice.

“With so many people dying due to the heat, we are locking the children indoors,” teacher Satyamurthy said in Khammam, which registered its highest temperature in 67 years on Saturday when the thermometer hit 48 degrees Celsius (more than 118 Fahrenheit).

Cooling monsoon rains were expected to arrive next week in the southern state of Kerala and gradually work their way northward.

Until then, volunteers were passing out pouches of salted buttermilk or raw onions — both thought to be hydrating. People used handkerchiefs and scarves to block searing winds and warm air from their faces.

Across the country, teenagers flocked to water basins and rivers to cool off, while many adults took refuge lying on rooftop cots in the shade.

Forecasting service AccuWeather described this as the most intense heat wave in India in recent years. Thursday’s death toll in Andhra Pradesh alone, at 1,360, was already higher than in the state’s last heat wave in 2003, when 1,300 died in what was then a unified state including both Telangana and Andhra Pradesh.

Doctors were on alert for heat-related illness like sun stroke. “They are also telling people that, if they have to step out during the day, then they should take precautions and use a hat or something to cover their head,” said Sarojini, a health officer for the Andhra Pradesh city of Vishakapatnam who goes by one name, as is common in the region.

READ: About 1,100 people dead as summer temperatures soar in India

Telangana’s school board postponed the start date for colleges for a week from Monday. Meanwhile, Telangana disaster management official Sada Bharagavi said the state government had opened centers where cold water was being served, publicized the symptoms of sun stroke and changed work times in outdoor areas under rural employment schemes.

One Hyderabad man was doing his daytime newspaper route in the early morning to avoid the hottest temperatures. “It is difficult to do this work in this harsh weather, but I have a family to take care of,” said Rajaiah, who goes by one name.