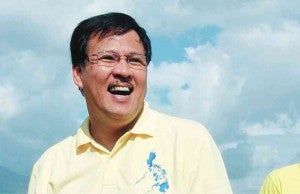 Interior Secretary Mar Roxas on Wednesday paid tribute to his late predecessor and close friend, Jesse Robredo, who would have turned 57 years old this year.

In an e-mailed statement, Roxas cited Robredo’s achievements as one of the leading advocates of the Aquino administration’s “daang matuwid” (straight path) governance motto.

He vowed to continue the reforms that Robredo instituted in the Department of the Interior and Local Government before he was killed in a plane crash in August 2012.

“Jesse was willing to give his all for what was right. And he did. He is fondly remembered and sorely missed. He remains an example and inspiration to reformists in government,” Roxas said.

“Although his life was short, he did many things for the country… (He) was among those (who) proved to us that honest, consensus-driven governance was not only possible, but necessary to achieve our dreams as a nation. A stalwart of good governance, he led by example,” he added.

An outstanding mayor of Naga City, Roxas said Robredo would always lead the cleanup after a storm and would be the first one to reach out to victims of fire.

“He ensured that public money went to projects which directly benefit the people. He was always wary of the trappings of government and lived with humility, simplicity and the dignified confidence of the incorruptible,” he said.

Roxas, who was designated by President Aquino as Robredo’s replacement after his untimely demise, said he would sustain Robredo’s programs to empower local government units and people’s organizations through “bottom-up budgeting.”