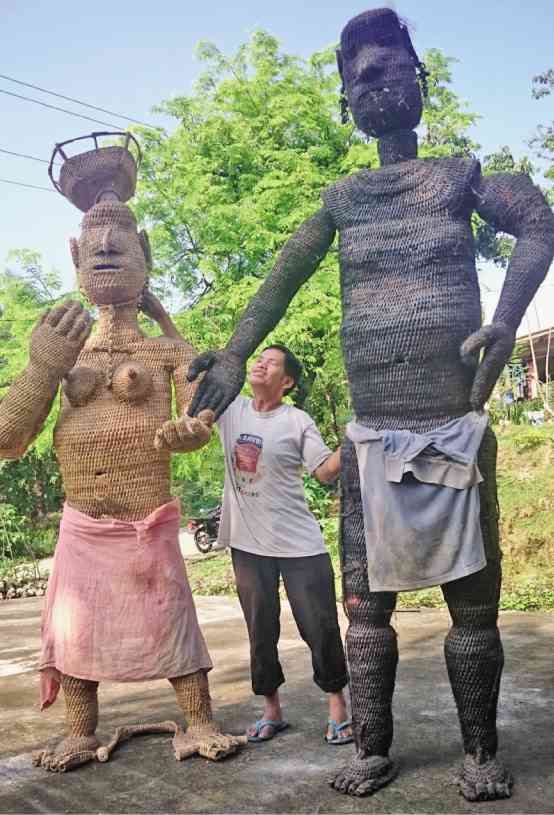 THE HOUSE of Rogelio Guinannoy, which overlooks a road intersection in the upland village of Comonal in Solano, Nueva Vizcaya, has become a favorite hangout for his relatives and neighbors. They are his biggest fans, never getting tired of admiring his creations of varied pieces of woven rattan handicraft.

The 48-year-old weaver’s latest creations have become an attraction among villagers—a pair of eight- and seven-foot rattan statues that, by their intricate designs, reveal the maker’s extraordinary patience, creativity and a discriminating eye for detail.

But these works of art are, to them, extraordinary: Guinannoy, their maker, is blind.

“Luh-hi” to family and friends, Guinannoy wears a proud smile talking about the pair of figurines which he considers his masterpiece due to the complexity of the designs, the amount of materials used and the more than two years he spent creating them.

Best of all, the concept is closest to his heart.

“I thought of this design because Wigan and Bugan were the first Ifugao people, and I am an Ifugao,” he said.

In Ifugao mythology, it was said the tribal god Cabbigat saw the earth barren so he sent his children, demigods Wigan and Bugan, to become its first inhabitants.

Guinannoy’s rattan sculptures have become a village attraction, with neighbors seeing these take shape through months.

“I see him working almost every day and I am constantly amazed by the effort and patience that he puts into those projects,” says farmer Jaynold Bungihan, 30.

Then he turns to Guinannoy: “Why did you still have to add those lizards on their legs? That would have been a few more days of work.”

“Because that would make them even more ethnic,” Guinannoy says.

The rattan statues feature intricate details of the human anatomy, along with traditional Ifugao accessories, making onlookers forget that the maker is blind.

Seven-foot female Bugan wears a traditional headgear and a necklace, and carries on her head a “ballengaw” (woven basket), while the taller Wigan has moveable hands. Both have “saniyah” or native lizards clinging onto their head and legs.

The sculptures have distinct private parts, complete with body hair made from wild grass. Guinannoy drapes these with tattered clothing whenever onlookers felt uneasy.

“I usually start off by weaving the body parts piece by piece, then I stitch them together. The hardest part is when I have to reach their head because I have to climb onto a platform,” he says.

He hopes to sell the pieces at a price that, he says, would be a reasonable reward for the effort that he has put into them.

“If my usual clients would buy it cheap, then I may not sell it anymore,” he says, referring to Baguio City-based native art collectors.

He says Wigan and Bugan are the 12th and 13th rattan sculptures that he has created. The previous ones, he says, were smaller, usually four feet.

But the statues are not yet complete, he says. For finishing touches, he still has to smoke Bugan in an improvised oven at the back of his house for days to give it that antique look.

Indanom Buhong, Guinannoy’s 74-year-old mother, says her son contracted a severe case of measles when he was 10 months old, which caused him to gradually lose his eyesight in the next three years.

But he liked weaving, Buhong says, and as a child, he mimicked the work of adult weavers in his village of Ducligan in Banaue, Ifugao, before taking the craft seriously at age 13.

When the Inquirer featured him in a story in 2002, Guinannoy produced only common rattan handicraft, such as “tinalih” (cylindrical baskets), “ulbong” (rice containers), “hape-eng” or “pasiking” (backpacks) and “pallungan” (bowls).

But Guinannoy tried weaving more complicated works of art, which included animal figures like carabao, cattle and “musang” or wild civet cat, which doubles into a casing for coins or paper bills.