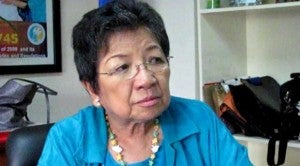 Loretta Ann “Etta” Rosales is no longer chair of the Commission on Human Rights (CHR).

Rosales, who was appointed to the agency by President Benigno Aquino III on September 1, 2010, has left her office, according to lawyer Mark Titus Cebreros, CHR officer-in-charge.

An activist and former member of the House of Representatives for Akbayan party list, she was scheduled to end her term at the CHR last May 5, 2015. CB

Beauty’s advice to Derek about her BFF Ellen