A BANK investigator for the Anti-Money Laundering Council (AMLC) said he need not be a handwriting expert to detect as suspicious the use of two different signatures by Senator Jinggoy Estrada’s alleged conduit in the pork barrel scam.

During Estrada’s bail hearing for plunder over the pork barrel scam, AMLC bank investigator Orlando Negradas admitted he is not an expert on handwriting.

But this would not stop him from performing his mandate as part of their investigation to also check the signatures of persons subject to bank inquiry, he said.

Negradas said Juan Ng, a businessman in San Juan where Estrada served as mayor, allegedly used two different signatures in his bank transactions. Ng was alleged to be the conduit of Estrada by transferring his supposed kickbacks in the pork barrel scam from Ng’s bank accounts to that of Estrada’s.

“We’re confronted with the accounts of Jinggoy Estrada and Juan Ng. What we compared is the signature cards of Ng and signature cards of Ng with other banks… We don’t have to be handwriting experts to conclude that these are different signatures,” Negradas told the antigraft court Fifth Division Monday.

According to the AMLC report that was used as evidence against Estrada, Ng used two different signatures for the issuance of checks in Metrobank and Chinabank.

Negradas in his testimony said Ng also used different signatures in his signature cards for his Metrobank account and Metropolitan Bank and Trust Company account.

The use of two different signatures was noted, especially after the AMLC said Estrada’s signature appears to be similar to Ng’s unconventional signature, raising suspicions that Estrada himself is Juan Ng. But Negradas did not touch on this matter. 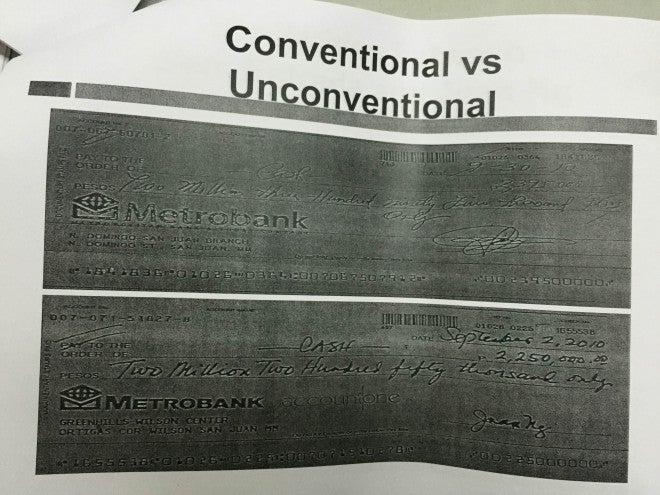 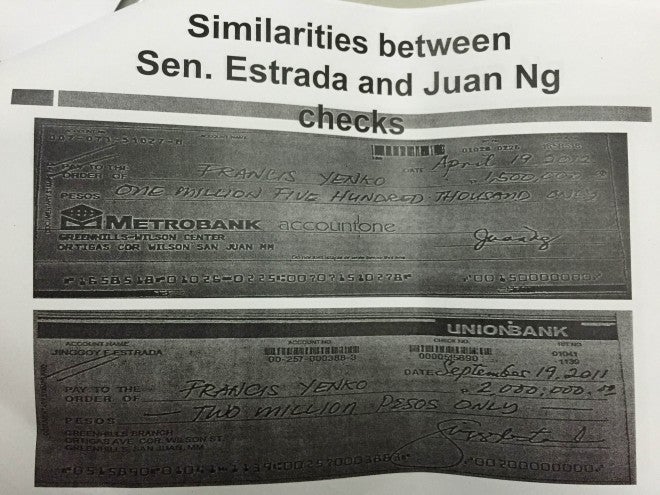 Photo show a similarity between the signatures of Juan Ng and senator Jinggoy Estrada.

In an interview, lead prosecutor Atty. Joefferson Toribio said scrutinizing the signatures of bank transactions is still part of the AMLC’s mandate.

He added that Negradas need not be an expert to spot the obvious difference in Ng’s signatures.

“It is part of their duty and investigation to compare signatures. In this case, you don’t need to be an expert to see that there are dissimilarities,” Toribio said.

For Estrada’s part, his lawyer Alexis Suarez said Negradas’ admission that he is not a handwriting expert only renders the AMLC findings as inadmissible.

“For us, it’s considered inadmissible. He’s not an expert witness on hand writing,” Suarez said.

Estrada is facing plunder and graft charges in the scam allegedly masterminded by Janet Lim-Napoles in which the lawmakers’ Priority Development Assistance Funds (PDAF) were diverted to ghost projects to rake in kickbacks.

The hearings over the pork barrel scam have resulted in the detention for plunder of Senators Estrada, Ramon Revilla Jr. and Juan Ponce Enrile, as well as former representatives Rizalina Seachon Lanete and Edgar Valdez. AC

Read Next
1 dead, 1 hurt in SLEx accident; 5-km traffic jam ensues
EDITORS' PICK
10 Filipinos positive for COVID-19 in UK, 7 in Ireland — envoy
Nograles: Cabinet members to donate 75% of monthly salary to aid COVID-19 fight
Quick chat with Nicole Andersson: ‘You really don’t need much to be happy’
IATF to LGUs: Issue ordinances vs attacks on frontliners, COVID-19 patients
Diokno to Duterte: OK to make fun of buck tooth, but focus on people’s needs first
Robredo spox thanks Duterte for defending VP’s efforts vs COVID-19
MOST READ
Coronavirus hotbed Rizal to shut borders on April 6
Gov’t mulling quarantine period extension of 15-20 more days
ADB warns PH against prolonged lockdown
Sotto on Isko Moreno’s call: We do our job without the media following our every move
Don't miss out on the latest news and information.