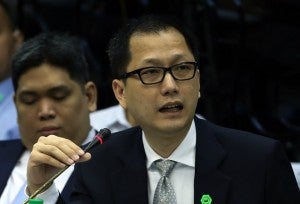 Businessman Antonio Tiu and three officials of Makati City government ordered arrested by the Senate went to the chamber last week and promised to attend the next hearing on corruption allegations against Vice President Jejomar Binay.

The Senate blue ribbon subcommittee headed by Senator Aquilino “Koko” Pimentel III is set to resume its hearing on May 28.

Aside from Tiu, the three others who appeared before the Senate blue ribbon committee and promised to face the next hearing were Danilo Villas, Vissa Marie Aldon, and Engineer Line de la Peña, said a staff member of Senator Teofisto Guingona III, who heads the committee.

Tiu, Villas, Aldon and De la Peña are among the 14 resource persons ordered arrested by the chamber for refusing to attend the hearings on the issue.

“I hereby undertake, as a sign of utmost good faith, that I shall attend the Senate investigation hearing on 28 May 2015,” Tiu said in a letter of undertaking dated May 21.

Read Next
Duterte confirms ‘ties’ with Davao Death Squad
EDITORS' PICK
Manila is 78th most expensive city in the world for foreign workers
TeaM Energy pushes development programs to help in pandemic rebound
Want to help local farmers? Shop small and eat Real Food
Piolo Pascual: The Ultimate Heartthrob continues to level up
ICC is everything but a court of ‘white people’
Garcia softens stance, meets IATF halfway on swab-upon-arrival policy
MOST READ
Sharon Cuneta on living in the US: ‘Nagagawa ko lahat ng normal na bagay’
ICC is everything but a court of ‘white people’
After flying PAF jet, AFP chief vows more modern aircraft for PH defense
Duterte-Duterte tandem possible but ‘winnability is another question’ — Binay
Don't miss out on the latest news and information.