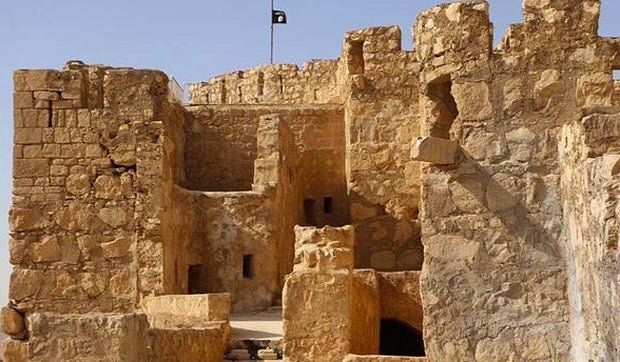 DAMASCUS, Syria — Islamic State of Iraq and Syria (ISIS) fighters broke into the museum of Palmyra, though a Syrian official said its artifacts have been removed and are safe while the U.S.-led coalition conducted airstrikes on the group’s installations near the captured ancient town — the first such reported attack in the central province of Homs. 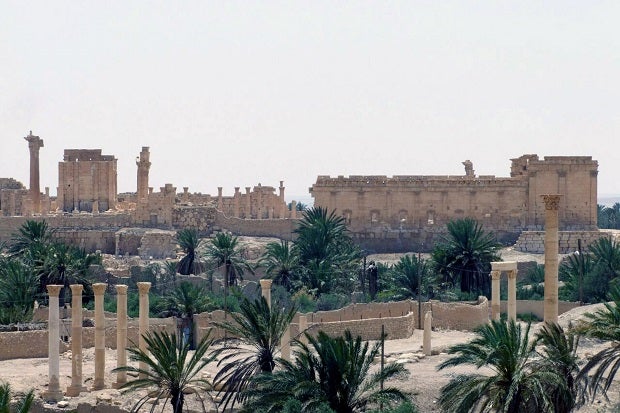 This file photo released on Sunday, May 17, 2015, by the Syrian official news agency SANA shows the general view of the ancient Roman city of Palmyra, northeast of Damascus, Syria. Members of the Islamic State group have captured the ancient town raising fears that the extremists will destroy its archaeological sites that have stood for two millennia. Palmyra, home to one of the Middle East’s most famous UNESCO world heritage sites, was under full control of militants on Thursday after troops withdrew to nearby bases. AP

The Department of Defense said in a statement that U.S.-led coalition aircraft had attacked an IS position near Palmyra, which goes by the modern name Tadmur, destroying six anti-aircraft artillery systems and an artillery piece.

The Islamic State group captured Palmyra on Wednesday, raising concerns around the world they would destroy priceless, 2,000-year-old temples, tombs and colonnades located in the town’s south.

The strikes would appear to help the embattled forces of forces of President Bashar Assad, which have had a succession of recent defeats to IS group and other rebels. But experts and archeologists said the airstrike, coming days after the group overwhelmed the city, was too little too late.

“It is like closing the doors after the horses have bolted,” said Amr Al-Azm, a former Syrian antiquities official and currently a professor at Shawnee State University in Ohio. 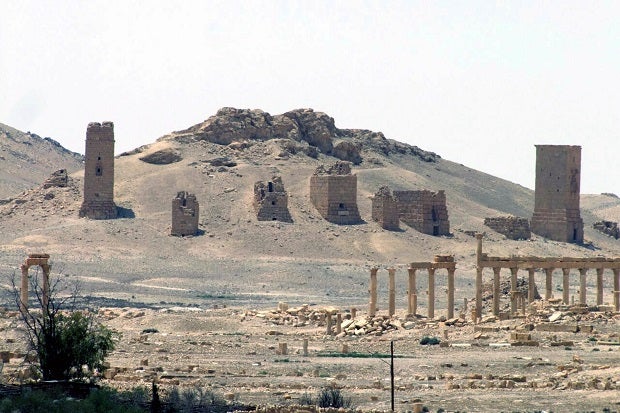 This file photo released on Sunday, May 17, 2015, by the Syrian official news agency SANA, shows the general view of the ancient Roman city of Palmyra, northeast of Damascus, Syria. AP

A picture circulated on Twitter accounts of Islamic State supporters showed the black flag used by the extremists raised over the town’s hilltop Islamic-era castle, a structure hundreds of years old. Al-Azm said the fact that the castle dates back to an Islamic civilization may protect it from the kind of destruction IS members have inflicted on pre-Islamic heritage sites such as the ancient cities of Hatra and Ninevah in Iraq.

The group says the ancient relics promote idolatry, but, it also maintains a lucrative business by excavating and selling such artifacts on the black market, according to antiquities authorities.

One activist in the city of Palmyra, who goes by the name of Khaled al-Homsi because of security concerns, told The Associated Press that the militants smashed a statue in the museum’s foyer — a replica that depicts ancient residents of Palmyra.

Maamoun Abdulkarim, the head of the Antiquities and Museums Department in Damascus, told the AP that militants entered the museum in the town’s center Friday afternoon, locked the doors and left behind their own guards. He said that the artifacts earlier had been moved away to safety.

“We feel proud as all the museum’s contents were taken to safe areas,” he told reporters. But Abdulkarim warned that the Islamic State group’s control of the town remains a danger to its archaeological sites.

Al-Azm said he doubts the museum was totally emptied because larger pieces would be hard to move. He said the museum also contained at least two mummies, and carvings from the nearby tombs, mostly dating to the 1st, 2nd and early 3rd century

Al-Azm said he fears that the “real looting” will take place at the site itself, adding that the group will take its time to recruit local antiquities experts to help in running the illicit trade. But he worried that the Temple of Bel, the majestic structure in the heart of this desert oasis, will ultimately be destroyed.

“It is the poster child of an IS cultural heritage atrocity,” he said, saying the temple in later years was used as a church and has walls covered in frescos.

Al-Azm said the only way to save the ancient site is by driving the Islamic State group out of the town.

So far, the IS militants have been primarily concerned with consolidating their control over the city, conducting house-to-house searches for government soldiers and pro-government militiamen and, in some cases, publicly killing those that they find, according to activists and government officials. They have also restored electricity partially to the town, and urged government employees to return to work.

On Saturday, commercial trucks were allowed to travel to the city of Raqqa in northern Syria, the self-declared capital of the IS group, and they returned to Palmyra with fresh produce for the city that has been besieged by the fighting since May 13, al-Homsi said. The group offered the truck drivers free fuel, he said.

The Defense Department statement didn’t specify where the strikes took place. Activists said they heard of no airstrikes in the immediate vicinity of the town, but that the battles between IS fighters and government forces have continued in a mountainous area containing oil fields northwest of the town.

Aymenn al-Tamimi, a researcher of Islamic militant groups, said the coalition airstrikes technically represents an intervention on behalf of Assad’s regime to expel the group, adding that similar strikes in the northern province of Deir al-Zour, where IS is advancing on a major regime military base, can be also perceived as such.

“However, in the end airstrikes don’t mean much if the ground forces are so ineffective in resisting — as has been the case in Palmyra,” he said.

The city’s museum and artifacts have been damaged and looted earlier during Syria’s four-year civil war. In a 2014 government report prepared for the U.N.’s cultural agency, damage already was recorded because of fighting in the area around the Temple Bel. Bullets and shells hit the temple’s columns, while two of its southern columns had collapsed. The report also recorded looting.

Abdulkarim said some 6,300 artifacts from Syria were seized and smuggled out of the country in the last four years.

The Islamic State group holds a large stretch of territory across Syria and neighboring Iraq. In Iraq, police Col. Aziz al-Shihawi said that Iraqi troops and Shiite militias recaptured the town of Husseiba in Anbar province Saturday. He said Iraqi allied forces killed several militants before they withdrew from the town, some 7 kilometers (4 miles) east of the Islamic State-held city of Ramadi.

Baghdad says preparations are underway to launch a wide-scale counteroffensive in Anbar province involving Iranian-backed Shiite militias, which have played a key role in defeating the Islamic State group elsewhere in the country. The presence of those militias could, however, fuel sectarian tensions in the Sunni province, where anger and mistrust toward the Shiite-led government runs deep.