‘Man at ATM’ only NBI lead in missing traders’ case 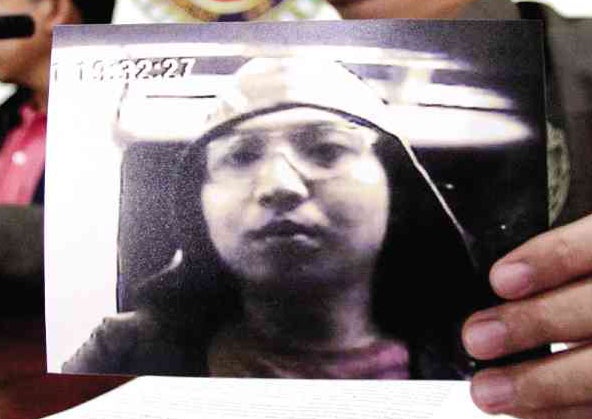 THE NBI-TAGGED suspect as seen at an ATM booth in Binangonan.photos by RICHARD A. REYES

The National Bureau of Investigation is tracking down a man who was seen withdrawing money and draining the bank account of one of the two business partners who went missing in January.

The NBI has released a photo taken of the still-unidentified man inside an automated teller machine (ATM) booth, tagging him as a suspect in the disappearance of Evan Labonete, 52, and Nicomedes Sierra Eguna, 55, building contractors both based in Quezon City.

According to Eguna’s wife, Nicomedes last sent her a text message around 3 p.m. on Jan. 19, telling her that he and Labonete were on their way to inspect a project in Antipolo City.

The two men were taking public transportation at the time and could no longer be reached when she tried to contact Nicomedes two hours later.

In a press conference on Friday, agent Aldrin Mercader of the NBI’s Anti-Organized and Transnational Crime Division said an ATM withdrawal for P10,000 was made from Labonete’s account on Jan. 21.

Two more withdrawals, for P7,000 and P700, were made from the same account on Jan. 22. All three transactions were done at ATMs in Binangonan town, Rizal province.

The NBI produced a photo of the suspect from the security camera footage of the third transaction.

“Except for the photo, we are facing a blank wall in the investigation,” Mercader said. “The families of the missing men have decided to involve the public in the search, in the hope that anyone who has information on the two men or the suspect will come forward. The last four months of anxiety have taken their toll on the families.”

Quoting the wives, Mercader said the missing business partners “are not big time contractors” and that their families had not been contacted by anyone demanding ransom.

Read Next
Ping Lacson targets budget ‘fat’
EDITORS' PICK
Smart offers wireless fiber-like speeds to Filipino homes with country’s first 5G Prepaid Home WiFi
Legarda: Ending Violence Against Women, a cause for all
This new condo in the South will make you want to turn a new leaf
National COVID-19 vaccination drive gets over 5.3 million people vaxxed so far
Pandemic prognosis: Where does it go from here?
Google won’t accept election ads for 2022 national polls
MOST READ
Bongbong Marcos to face another disqualification case
Christine Bersola, Julius Babao cleared of cancer after colonoscopy, endoscopy
Former PM Abe says Japan, US could not stand by if China attacked Taiwan
New Comelec commissioner gets CA nod
Don't miss out on the latest news and information.