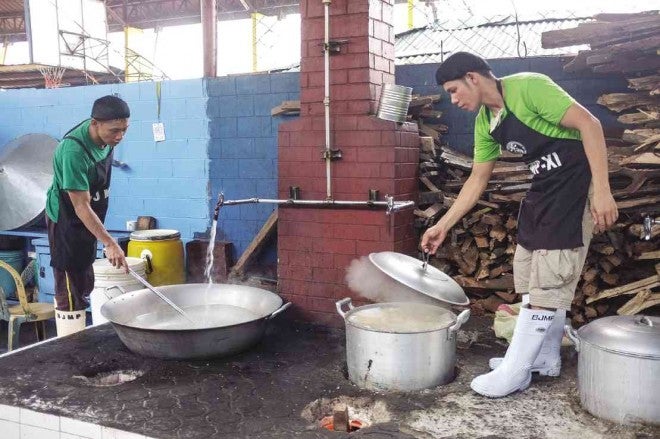 INMATES tasked with cooking food for 2,000 detainees at the Davao City Jail now use a solar water-heating system, which reduces cooking time by 20 to 30 minutes. KARLOS MANLUPIG

DAVAO CITY—At the break of dawn, inmates tasked with kitchen work start boiling water and cooking food for at least 2,000 fellow detainees at the Davao City Jail. Using firewood and a crude oven, they cook—and sweat—until everyone is fed up to dinner.

The same routine goes on the next day. “But cooking is a lot easier now compared to when we were still purely reliant on firewood,” one inmate said while checking out the chicken “afritada.”

On Tuesday, the prison facility received a new solar water-heating system from the International Committee of the Red Cross (ICRC) that is now being used in its kitchen to bring down environmental and financial costs.

The system has a tank with a capacity of 1,800 liters that can instantly produce hot water channeled through pipes to a tap directly over ovens where pots are placed.

By utilizing the sun’s energy to heat the water used for cooking, the kitchen can reduce cooking and boiling time for each pot by 20 to 30 minutes, the ICRC explained. This translates to a saving of at least 60,000 kilograms of firewood per year.

A guard said the facility used to have a truckload of firewood delivered three times a week. Now, it needs only a single delivery every two weeks.

“It’s a big help to everyone as the meals are now served on time, unlike in the past when they took so much effort to cook. This initiative has not only helped the jail save on costs, it has also instilled good housekeeping practices among the inmates. I always remind them to maintain such important projects to ensure sustainability,” said Supt. Simeon Dolojo Jr., the jail warden.

“Isn’t it amazing? We are now so high-tech,” an inmate said. Mounted on the wall of the kitchen is a digital monitor that displays the real-time temperature of the water facility.

Marco Albertini, ICRC water and habitat coordinator, said the project aimed to help jail facilities save cash from the measly allocated budget so that it could be rechanneled to efforts to improve jail conditions.

In 2009, it installed a biogas system at the Cagayan de Oro City jail.