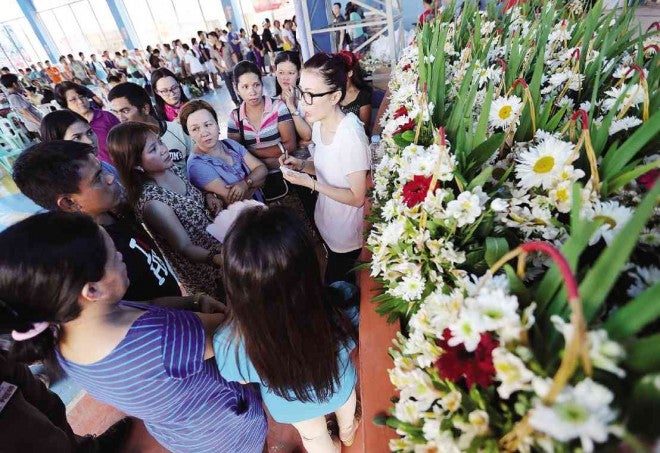 ALL APOLOGIES Barbara Ang (center), daughter of one of the Kentex factory owners, does some more explaining in a dialogue with the grieving families in Barangay Ugong, Valenzuela City, on Friday. RAFFY LERMA

Facing grieving families more than a week after the huge fire that hit the Valenzuela City factory co-owned by her father, Barbara Ang asked for forgiveness and more patience, saying her family was also shaken and still reeling from the tragedy.

“This is not the best time to point fingers at those who should be blamed or are at fault,” said Ang, the eldest child of Veato Ang, one of the shareholders of Kentex Manufacturing Corp., whose management is facing investigation not only for the May 13 inferno but also for questionable labor practices at its rubber slipper factory in Barangay Ugong.

“We are all going through the same thing. This is also our darkest hour,” she said, adding that her 80-year-old father was “shocked” and hospitalized upon learning about the fire. “We’re just glad that he did not suffer a stroke.”

Ang assured the families that the owners would not run away from their responsibilities.

Another Kentex owner, Guan King Ong, suffered third-degree burns in an attempt to save his son Tristan, who ended up among the 72 casualties in the seven-hour fire. Also killed were Heidi Pang, a minority shareholder, and operations manager Josie Ty.

Speaking to reporters after the dialogue with the families, Ang said “they deserve to hear ‘sorry’ from the owners. But we are not saying it’s our fault. This is an accident.”

“Their families died while working for us. I think it is our moral obligation to ask for forgiveness,” Ang said.

The reactions from the crowd that Ang addressed Friday at the Barangay Ugong assembly hall were mixed.

Helen Belando, 61, who lost her son Sammy in the fire, said she accepted the apology. “It was nobody’s fault. We are not the only family who lost loved ones,” said Belando, who came all the way from Hinoba-an, Negros Occidental province.

But for Niño Bartonico, who lost his brother Vincent, “the apology is not enough. We want justice.”

“We want someone to be held accountable for what happened,” said Bartonico, who also worked at Kentex as a delivery man. “Obviously, there were no fire exits.”

Ang said it took them a while to personally face the families because they were also recovering from their own loss. “Our commitment is to help as much as we can. We are gathering funds. If they need anything besides financial assistance, we have coordinated with a private, nongovernment organization to provide counseling,” she said.

Together with her brothers, company lawyer Renato Paraiso and other staff members, Ang led the distribution of bags of assorted groceries and P5,700 in cash among the families.

Also on Friday, the Interagency Anti-Arson Task Force that was created to investigate the cause of the fire conducted a “walk-through” at the site.

Bureau of Fire spokesperson Supt. Renato Marcial said the inspection confirmed initial findings that the fire started at the factory’s finishing section, where a pull-up door was being fixed by a welder shortly before noon on May 13. The sparks came into contact with a tall pile of sacks containing a highly flammable “blowing agent,” he said.

Sixty nine workers on the factory’s second floor were immediately exposed to toxic fumes, Marcial said. The fire alarm system did not function that’s why they were not immediately warned, he added.

Marcial said the task force is expected to release its report by the end of the month and would name the parties who should be held liable.

Read Next
BDO: Junjun Binay’s deposits not out of the ordinary
EDITORS' PICK
Harnessing technology for quality education
Connect to PH’s fastest network with new Signature Plan Lite at only P599 per month
Nesthy Petecio assured of Olympics bronze, ousts Colombian foe
Tips for a cheerful life
Petecio ‘blessed’ as Olympic gold quest continues
Philippines to bring home multiple Olympic medals for first time since 1932
MOST READ
Nesthy Petecio assured of Olympics bronze, ousts Colombian foe
Isko for 2022? Manila mayor takes a swipe at Duterte on live broadcast
Why is Taiwan not called Taiwan at the Olympics?
Lacson bares talks with Robredo ahead of 2022 polls
Don't miss out on the latest news and information.