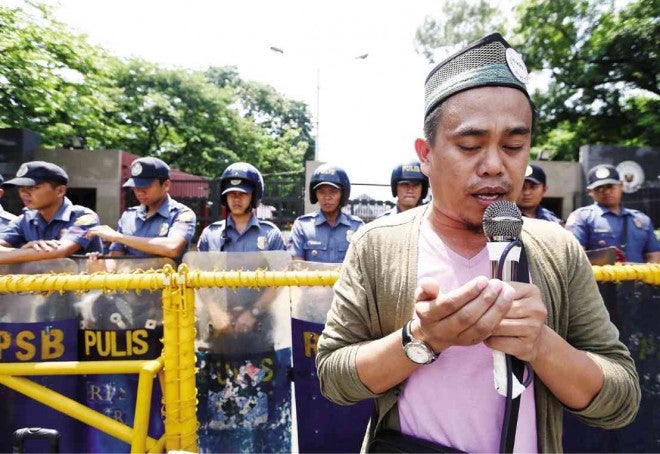 A DEMONSTRATOR offers a prayer for the House of Representatives as it deliberates on the proposed Bangsamoro Basic Law.LYN RILLON

ILOILO CITY—Senate President Franklin Drilon said the Bangsamoro Basic Law (BBL) that will be approved by the Senate would be constitutional.

“That is the view of Sen. Miriam (Defensor-Santiago). We will debate on that on the floor,” Drilon told reporters at the sidelines of a forum on the Jalaur River MultiPurpose Project II at the Eon Centennial Resort, Hotel and Convention Center here.

Santiago chairs the committee that drafted the report.

Asked if the committee report and debate in the Senate will delay the passage of the BBL, Drilon said these were still within the timetable of passing the BBL by June 11.

The draft report said the BBL cannot be passed by mere legislation but would require amendments of provisions of the Constitution.

Among the issues raised in the report are on territoriality and sovereignty in the creation of a Bangsamoro government.

Last Wednesday, the BBL committee of the House of Representatives approved the bill by a vote of 50-17, with one abstention. The approval paves the way for the submission of the bill to other committees that will also deliberate on the proposed measure.

BBL is being opposed by Senators Ferdinand Marcos Jr., son of the dead dictator Ferdinand Marcos Sr., and Alan Peter Cayetano, who is nurturing dreams of becoming president and is believed to be making a run for 2016 if he found the surveys in his favor.