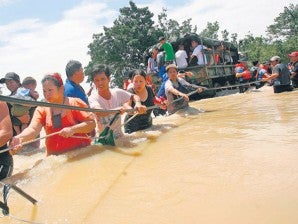 LIFELINE Philippine Army soldiers help evacuate residents of Hagonoy town in Bulacan to higher ground as floodwaters brought about by back-to-back Typhoons “Pedring” and “Quiel” rise to rooftops in the province and the rest of Central Luzon. MARIANNE BERMUDEZ

Officials have warned Filipinos to brace against the inconvenient truth of devastating storms, flooding and drought unless policies and projects are put in place to mitigate climate change.

Undersecretary Graciano Yumul of the Department of Science and Technology (DOST) said that  in the next 20 to 50 years, the Philippines would find “the dry seasons drier and the wet seasons wetter.”

“With the climate change scenario, we will see more of this as a frequent reality,” Yumul said in an interview. “What we used to consider as abnormal we should now consider as normal,” he noted.

Scientists describe the phenomenon as any distinct changes in weather patterns, such as temperature, rainfall, wind and snow over a long period of time.

A major factor is global warming—the increase in the oceanic and atmospheric temperatures of the planet resulting in the melting of the ice caps and the rising of the seas.

The doomsday scenarios, depicted in Al Gore’s 2006 award-winning documentary, “An Inconvenient Truth,” are now playing out in the Philippines.

The climatology division of the Philippine Atmospheric, Geophysical and Astronomical Services Administration (Pagasa) has released the results of a study in 2010 concluding that climate data from 1960 to 2003 showed significant increases in the frequency of hot days and warm nights in many areas of the country.

On the other hand, Pagasa observed that cooler days had decreased. This trend mirrors the experience of other countries in Southeast Asia, Pagasa said as it predicted more rains in the Philippines in the coming decades.

“Reduction of rainfall is seen in March, April and May in most provinces, while rainfall increases are likely in Luzon and Visayas in 2020 and 2050 during the June-July-August and September-October-November seasons,” the study said.

“Greater increase in rainfall is expected in the provinces of Luzon (0.9-63 percent) and Visayas (2-22 percent) during the peak southwest monsoon period (June-July-August).”

The number of days where temperature will breach 35 degrees Celsius will also increase in 2020 and 2050, according to Pagasa models.

Antonio Apostol Jr., chief geologist of the Mines and Geosciences Bureau, said human activities in the regions that bore the brunt of Typhoons “Pedring” and “Quiel” that struck the country last week exacerbated the hazards and the risks.

The plains of Bulacan and Pampanga have always been prone to floods, he said.

But the proliferation of fishponds and aquaculture projects in the major waterways and in the coasts has slowed down the flow of water from the typhoons and the dams, resulting in prolonged flooding in residential and rural areas, Apostol said.

“These have a multiplier effect. So when the water was released from the dams, the natural drainage could not handle it anymore,” he said.

If there were no fishponds and garbage clogging the canals and rivers of the region, “the outflow would have been quicker,” Apostol said.

Floods and landslides will be more widespread until officials realize that they should adapt to the changes in weather and lessen their effects on the general population, Apostol and Yumul said.

“In other parts of the country, we are seeing the same situation. In the cities of Butuan and Cotabato, there were floods, too, because the rivers were clogged with water lilies,” Apostol said.

“In Cotabato, for instance, the industries pollute the river there with nitrates which induce the growth of the lilies,” he added.

Yumul also noted that deforestation had caused flooding in areas which did not experience it in the past. “The deforestation in the last 20, 50 years has come back to us,” he said.

Local officials, he said, should be more prepared to respond to extreme weather events to prevent the loss of lives and properties. “We’ve been telling them this for the last 10 years,” Yumul said.

Ricardo Calderon, regional executive director of the Department of Environment and Natural Resources, said yesterday that forest cover in the western side of Nueva Ecija and Bulacan was still adequate. He blamed flooding on heavy rainfall, the release of dam water and high tide.

“Although our forest cover may be high, the trees could not retain the volume of water,” Calderon said.

He denied illegal logging was rampant, disputing claims by Philippine Daily Inquirer informants that local officials were collaborating with the activity.

Senator Loren Legarda, chair of the Senate climate change committee, said she called Yumul on Saturday night to ask whether protocols in releasing water from dams in Central Luzon were observed last week.

“The undersecretary said floods will be the norm, that even if a typhoon brings a lighter volume of water, we can expect this scenario happening now with Typhoons Pedring and Quiel. He said Pedring brought only 30 percent of Ondoy’s volume and yet the damage was nearly the same,” Legarda told the Inquirer.

“That means if Tropical Storm ‘Ondoy’ happens again, a typhoon with that huge amount of rain, we have to brace for even deeper floods,” she warned.

Legarda said the confluence of events she had been warning against for years had now led to disturbing images of helpless residents waiting for help on rooftops, long lines of people queuing for potable water, and whole barangays transformed into river extensions.

The senator said that illegal logging, slash-and-burn farming and quarrying in mountain areas would lead to soil erosion and flooding.

Representatives of the Central Luzon dam operators have been summoned to a hearing of the Senate on Monday afternoon.

“If (Pagasa) can predict the volume of rainfall, dam operators can already release water in increments that would not be destructive,” Legarda explained.

“If this kind of meteorological information can be determined, say, one week before a typhoon arrives, does it not make common sense that the dam operators would not release the water only on the day it finally arrives,” she asked.

She noted that dam reportedly released water on September 27, after Pedring struck.

Senate President Juan Ponce Enrile cautioned that predicting rainfall would not be easy.

“The nature of calamity is that weather is really unpredictable. Who really knows if the rainfall prediction is correct?  What if the amount of water released by the dams based on Pagasa’s advisory could not be recovered from the expected rains?” Enrile said.

He said that while the government could always attempt to determine accountability, “we’ll have to find long-term solutions and planning, instead of just prosecuting anybody.” With reports from Tonette Orejas and Carmela Reyes-Estrope, Inquirer Central Luzon