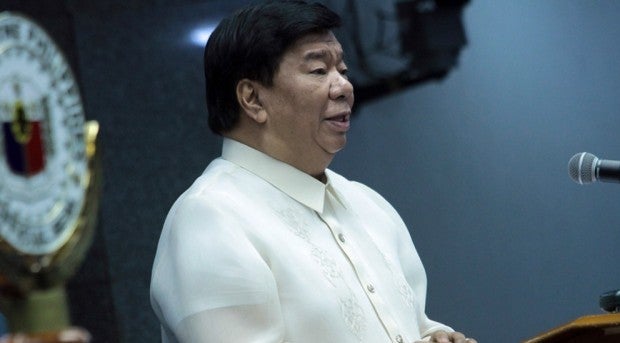 Top administration officials on Wednesday rejected suggestions that the ruling Liberal Party (LP) might be headed for a breakup over who between Sen. Grace Poe and Interior Secretary Mar Roxas should be the standard-bearer in 2016.

“There is no such thing,” Senate President Franklin Drilon, the LP vice chair, told reporters. “It is only in the newspapers.”

Budget Secretary Florencio Abad said an LP breakup was “just in the imagination of those in the opposition camp.”

“The ongoing discussion among the President, Secretary Roxas and Senator Poe is generating insecurity and apprehension within the ranks of the opposition and those who cannot wait to return to old, discredited ways,” Abad told the Inquirer.

“I understand the conversation is progressing well. The three of them represent a clear road map to 18 years of good governance reforms,” he added.

House Majority Leader Neptali Gonzales II, chair of the LP parliamentary caucus, on Tuesday admitted that he was unsure whether the party would remain intact in the event either Roxas or Poe was picked to run for President.

“Only time will tell, but political history will tell us, based on past events, that parties separate and break up because in the setting of Philippine politics you cannot avoid that,” he told reporters.

Aquino’s spokesman, Edwin Lacierda, said party leaders “are solidly behind the President and they will stand by (his) decision when the time comes as to who he will endorse as the presidential standard-bearer.”

“They will respect, follow, and adhere to the decision of the President,” he told reporters, noting that “certain quarters outside of LP” wanted to “see the breakup of LP naturally.”

Citing his conversations with LP members, Lacierda said “there is no concern as to a breakup.” But he said the party leaders “obviously prefer” Roxas.

“At the end of that day, the President will endorse someone who will push forth the reforms of daang matuwid (righteous path of governance),” he said.

Aquino has been meeting with Poe and Roxas in preparation for announcing his choice of the LP’s standard-bearer.

Poe has emerged as a viable option because of Roxas’ poor showing in surveys on possible presidential candidates.

Roxas on Wednesday refused to be drawn into the debate on who should be the LP’s standard-bearer.

“I’m actually happy that there are many people who are interested in what Mar Roxas will do. Maybe that only means I’m the strongest candidate because they are making commentaries about me or on what I should do,” he told reporters in Camp Olivas at the distribution of police patrol vehicles.

Roxas said he and the President had been discussing several matters affecting the country, including politics.

He said it was possible that he, Poe and Mr. Aquino would again meet soon after the two meetings they had.

When asked if he was open to a possible team-up with Poe, Roxas said: “We will talk about that at the right time.”

Told that former Sen. Panfilo Lacson described him as a problem analyzer and not a problem solver, Roxas approached one of the brand-new police vehicles and tapped its rear portion.

“I think this is a solution, isn’t it? Are the 1,470 units of police patrol vehicles for all the towns in the country real? This is concrete proof that we are solving the problem of our policemen regarding their service vehicles and in curbing criminality,” he said.

Roxas may slide down for Poe, says LP