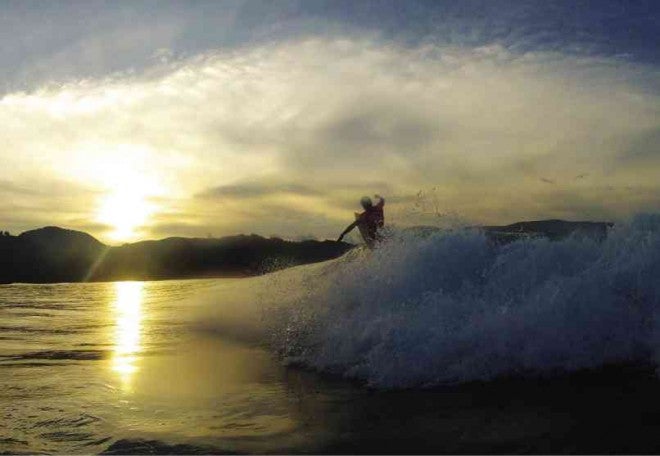 THE ‘MAJESTIC’ Puraran’s waves in Catanduanes province, which can go as high as 4.6 meters, are deemed every Filipino or foreign surfer’s dream.  CONTRIBUTED PHOTO/Ezra Efondo

SOME time ago, tourists hardly recognized Catanduanes Island in the Bicol Region on the Philippine map—sometimes even mistaking it for a province in the Visayas—until the discovery of a surfing spot there that was to be its claim to fame.

Since the “majestic” Puraran waves drew notice in the ’80s, Catanduanes has always been on the country’s list of ultimate surfing destinations. Even with the abundance of virginal beaches and historical sites, Puraran Beach has become the main attraction.

In Barangay (village) Puraran in Baras, a fifth-class municipality (annual income: P15 million-P25 million) of over 12,000, old-timers say that a group of Australian professional surfers who went there several decades ago saw the potential of Puraran Beach, the waves smashing from the Pacific Ocean, tagging it “The Majestic.”

“The foreign tourists wanted to keep Puraran a secret because they knew that once the place became crowded, they wouldn’t enjoy it that much,” surfer Genesis Efondo said.

Puraran’s waves, deemed the most challenging in the Philippines, are every Filipino or foreign surfer’s dream, Efondo said. By word of mouth, people started going to Puraran.

“We own this island and we can do what we want with it … and basically it’s [to boost] tourism,” Efondo said.

But at the time, resort owners were having a hard time picking up guests because of the “dangerous” reputation of the place.

“They thought Puraran was meant only for professional surfers, when in fact it is safe for amateurs, especially during summer,” said Efondo, who lives in Virac, the capital of Catanduanes.

He recalled his first time in Puraran when his brother, Ezra, a freelance web designer and surf enthusiast, brought him there.

“It was almost a two-hour drive and I wondered, ‘Why would Tisoi (Ezra) even bother going here? It’s too far away from town (Virac),” Efondo said.

Ezra, however, never saw the difficulty and was optimistic in promoting the place. Efondo said it was his brother who helped mostly in inviting guests to Puraran.

“When Tisoi came to help, he used his network and connections to spread the word,” Efondo said.

In 2014, Ezra thought of organizing an event similar to those held in Baler in Aurora province, San Juan in La Union province and Iba in Zambales province to catapult Catanduanes onto the surfing map of the Philippines and of Southeast Asia. Thus, the first surf music festival, Catanduanes Reef Break (CRB), came to life.

In an interview last year, Ezra said that as a surfer himself, he wanted to introduce Puraran to the sport and Catanduanes as a “happy island” to Filipinos.

“Though we have an annual surf competition here during October, the problem was it’s only participated in by local surfers,” Ezra said. “I want people to experience the fun and beauty of Catanduanes.”

Efondo said Ezra saw how these kinds of events played a big part on tourism in key surfing destinations in the country.

“Besides, it was an opportunity for Puraran since some of these popular surf spots don’t have waves during summer,” Efondo said.

People in Puraran saw his passing as a huge loss, especially to the province’s tourism, but it inspired them to do something similar to promote Catanduanes.

“Because of him, tourism events sprang recently and they’re slowly progressing,” Efondo said. Even the local tourism board has become more active lately, he noted.

Efondo, who took over the responsibility of a festival director for CRB, said he tapped Ezra’s connections to push the surf music festival on May 27-30.

“I know Ezra’s heart and if there’s anyone who would be able to carry on his heart for the event, it must be me. If no one takes action, Ezra’s passion will die with him,” he said.

The four-day CRB 2015 will host a surf competition and clinic and other activities, such as a downhill skate contest, a kite festival and beach games. A beach party and rock reggae concerts will also be held, featuring guest performers “The Voice” finalist Kokoi Baldo, reggae band Indio I, jazz guitarist Brix Tan, and DJs Issa Ramos, Jade Hartman and Marts Ballesca.

A sky lantern and solemn night tribute will be held for Ezra on the first night of the event. (For more details of the festival, visit CRB’s official website, www.catanduanesreefbreak.com.)

Efondo admitted that the first CRB had its shortcomings because of a lack of support from the local government.

“I already let bygones be bygones and talked to the people involved to have a do-over. Now we have the support we need,” he said.

Proceeds will be given to Surf4Ezra.org, a nonprofit organization created by Ezra’s friends and family dedicated to continue his advocacy of helping Puraran surfers, the local community and Catanduanes tourism.

Surf4Ezra.org is also looking into the possibility of starting a livelihood for the Puraran community by teaching them to shape surfboards for selling.

“Some locals will have their own source of income and that’s what we want,” Efondo said.

By stepping up their game in promoting Puraran, and Catanduanes as a whole, Efondo believes that one day the province will be a surfing community like that of Bali, Indonesia.

“We are doing everything to push Ezra’s ideals and I hope after another CRB this year, people will tell their friends what the ‘happy island’ has in store for them … just like how Ezra saw it,” Efondo said.