10 provinces outside of ARMM may end up joining Bangsamoro 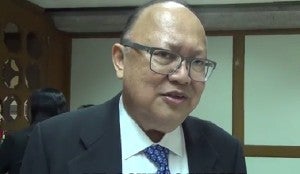 At least 10 provinces outside the core territory of the Autonomous Region in Muslim Mindanao (ARMM) may end up joining the Bangsamoro under the Malacanang-vetted working draft approved by the House ad hoc panel.

Lawmakers in the minority sounded alarm bells on Wednesday over a clause dramatically expanding the potential coverage of the Bangsamoro that was added at the last minute to the controversial “opt-in” provision of the draft law.

Minority Leader Ronaldo Zamora said he was “shocked” by the reference to the 1976 Tripoli Agreement in the opt-in provision, which basically meant that the provinces that had already voted against joining the ARMM could still be subject to future plebiscites for joining the new Bangsamoro area.

“Did you notice a reference to the Tripoli Agreement?” he told reporters at the regular forum of minority lawmakers.

“Maybe people don’t know what this means: The provinces that they thought were not included, and that there was nothing to fear in the BBL, these congressmen who represent these provinces, may not realize that they may be included,” Zamora said.

The “areas of autonomy” identified in the Tripoli deal signed between government and the Moro National Liberation Front include the core territory of the ARMM comprising the provinces of Basilan, Sulu, Tawi-Tawi, Lanao del Norte, and Maguindanao, and at least eight other provinces outside the ARMM.

Thus, 10 provinces are in effect covered under the opt-in provision of the Bangsamoro draft law, the minority lawmakers said.

“Do the congressmen voting so readily for these provisions understand that they are now in play?” Zamora said. “Whether you voted against inclusion in previous plebiscites [to join the ARMM], you’re now back in play,” he said.

Zamboanga del Norte Rep. Seth Frederick Jalosjos said it was clear that “not just core territories” would be affected but all the provinces under the Tripoli agreement.

“We’re talking about opt-in, but there’s no opt-out. This is a very dangerous provision,” he said.

YACAP Rep. Carol Jayne Lopez said that including the ARMM provinces, the opt-in provision would span a total of 15 provinces “involving 28 congressmen.”

Their inclusion shall be effective when approved by a majority of the votes cast in a plebiscite of political units directly affected, and petitions may only be filed after the fifth and 10th year after the enactment of the Bangsamoro law.

This is a major departure from the original provision in the version submitted to Congress by the executive, which read:

“The areas which are contiguous and outside the core territory may opt at anytime to be part of the territory upon petition of at least 10 percent of the registered voters and approved by a majority of qualified votes cast in a plebiscite.

The committee chair, Cagayan de Oro Rep. Rufus Rodriguez, had actually moved to have this original opt-in provision deleted from the draft entirely, based on the recommendation of the Peace Council.

But the amended version, including the reference to the Tripoli Agreement, had apparently been added when Rodriguez and other lawmakers met with President Aquino to draft the final version on the eve of voting.

It was this “chairman and vice chairpersons’ working draft” which was adopted and voted on by the 75-member ad hoc panel from Monday to Wednesday. AC

Pope accepts resignation of Paris archbishop over relationship with woman