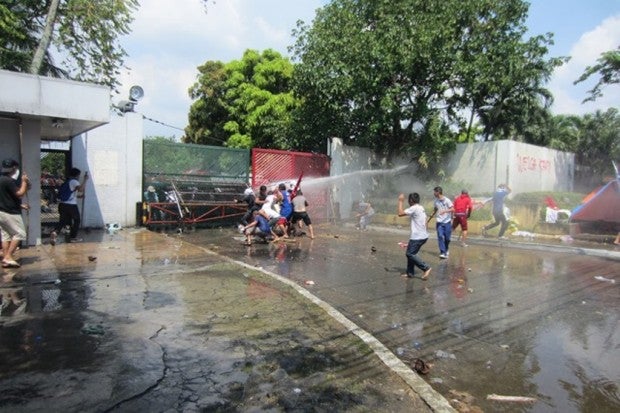 SAN PEDRO CITY–A series of clashes between protesting workers and security personnel of a distillery plant have continued a day after nearly a hundred workers went on strike in Cabuyao City, Laguna.

The latest round of clashes happened thrice before noon on Tuesday as the workers stood their ground on the picket line in front of the Asia Brewery compound in Barangay (village) Sala.

Tanduay Distillers operates a plant inside the compound of Asia Brewery.

Superintendent Joseph Bayan, chief of police of Cabuyao City, said the company’s security personnel used water cannons to force 40 to 50 workers outside the compound, where the rest of the demonstrators, about a hundred of them, erected their picket line on Monday.

Once back on the picket line, the workers began pelting rocks on the security personnel.

“(But) the security (officers) were using shields. They would only pick up those rocks and hurl them back at the workers,” Bayan recounted.

He said, in a separate phone interview, Tudla decided to go on a sudden strike after the company issued a memo on May 16 ordering about 96 contractual employees to stop reporting to work by May 18.

Bayan said the situation has been pacified as of noon with around 50 policemen on standby to prevent another round of violent dispersals.

He said they are still waiting for instructions from the Department of Labor and Employment as to when the local police should step in.