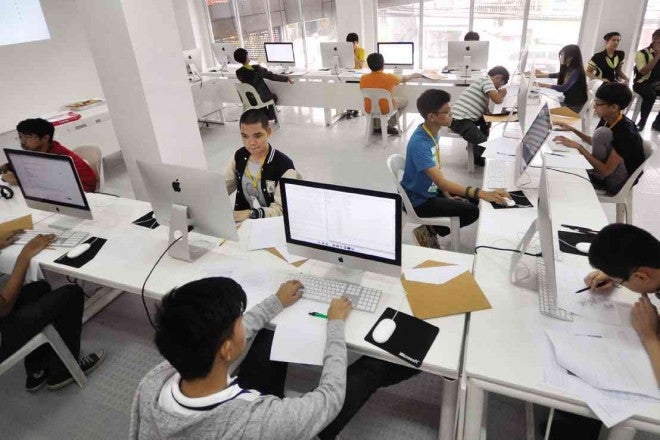 CONTESTANTS are glued to their computers as they analyze and solve problems given during the National Olympiad in Informatics held on May 12-13 at University of Pangasinan in Dagupan City. WILLIE LOMIBAO/INQUIRER NORTHERN LUZON

DAGUPAN CITY—Robin Christopher Yu, 15, was nervous when he sat down in front of a computer as one of the finalists in the two-day National Olympiad in Informatics (NOI) held at University of Pangasinan here that started on May 12.

“The problems were very difficult, but then I was able to push through to solve them and it was enjoyable as a contest,” Yu said.

On Wednesday, Yu topped the competition and earned one of the four slots in the Philippine team to the International Olympiad in Informatics (IOI), which will be held in Almaty, Kazakhstan, from July 26 to Aug. 2.

The IOI, according to its website (www.ioinformatics.org), is one of five international science Olympiads whose primary goal is to stimulate interest in informatics and information technology (IT). It was proposed to the 24th General Conference of the United Nations Educational, Scientific and Cultural Organization (Unesco) in Paris.

This is the first time the Philippines is competing in the IOI, said Martin Gomez, NOI chair and Philippine team leader. Last year, the country joined the IOI in Taipei as observers.

Gomez said he and IT expert Wilson Chua had thought of organizing the NOI last year to enable more Filipino students to be recognized on the world stage.

They gathered all requirements and sought the approval of the Department of Science and Technology to hold the first national competition in 2014. For the elimination round last year, close to 200 participated nationwide, Gomez said.

According to the IOI website, contestants must show basic IT skills, such as problem analysis, design of algorithms and data structures, programming and testing. They must also have analytical skills and should learn to solve problems using algorithms, or patterns that have been studied throughout history.