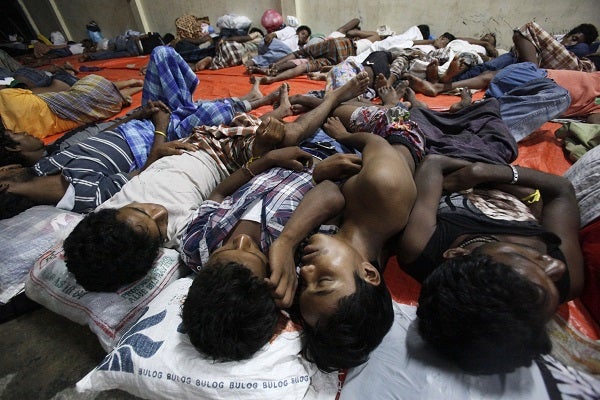 Migrants sleep at a temporary shelter in Langsa, Aceh province, Indonesia, Sunday, May 17, 2015. Boats filled with more than 2,000 Bangladeshi and Rohingya migrants have landed in Indonesia, Malaysia and Thailand, and thousands more migrants are believed to be adrift at sea after a crackdown on human traffickers prompted captains and smugglers to abandon their human cargo. AP

KUALA LUMPUR, Malaysia— Malaysia has launched a series of high-level talks with its neighbors to seek a solution to a deepening crisis of thousands of refugees stranded off Southeast Asia’s shores.

Malaysian Foreign Minister Anifah Aman met Sunday with his counterpart from Bangladesh ahead of meetings with the Indonesian and Thai foreign ministers in the coming week.

Malaysia is the current chair of the 10-nation Association of Southeast Asian Nations, which has been criticized for long ignoring the plight of Rohingya Muslims fleeing persecution in Myanmar.

Boatloads of more than 2,000 Rohingya and migrants from Bangladesh have landed in Indonesia, Malaysia and Thailand, but thousands more are stranded at sea. The three countries are often turning them away or resupplying them with water and food then redirecting away from their shores.