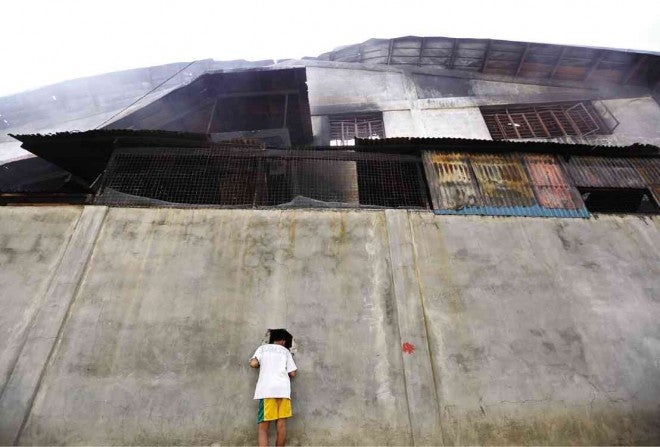 A boy peers through a hole in a wall that was made by firefighters for their hoses to reach further into the Kentex footwear factory in Valenzuela when it burned down on May 13. RAFFY LERMA

Malacañang on Saturday vowed that heads would roll following the huge fire that killed at least 72 people at a footwear factory in Valenzuela City on Wednesday.

Citing alleged labor law violations committed by the owners of Kentex Manufacturing Inc., deputy presidential spokesperson Abigail Valte said the Department of Labor and Employment (DOLE) was “intensifying their inspections when it comes to industrial work places like the one in Valenzuela.”

“Certainly we don’t want it replicated,” she said in an interview on the government-run Radyo ng Bayan.

Labor Secretary Rosalinda Baldoz earlier described the company’s violations as “not only illegal” but also “immoral,” saying Kentex owners had no “sense of responsibility.”

Valte said: “That heads must roll, I think that’s already a given, but after due investigation and findings based on evidence.” The Palace would expect the DOLE to find more about “the circumstances that led to the conditions of the unfortunate workers in that factory,” she added.

A DOLE-National Capital Region report by Director Alex Avila found that Kentex had been tapping an “illegal subcontractor,” CJC Manpower Services, which had 104 workers at Kentex on the day the fire broke out.

Based on the list by the Valenzuela City government, Avila said “it appeared that 36 of those missing were CJC workers deployed at Kentex.”

Kentex lawyer Renato Paraiso earlier disputed Baldoz’s harsh assessment of the company, saying it had obtained certificates showing that it had been paying the right salaries and remitting contributions to the Social Security System and Philippine Health Insurance Corp.

Meanwhile, Valenzuela City chief of police Senior Supt. Rhoderick Armamento said the welder, who was then fixing a gate in the factory and set off sparks that reportedly started the fire, had asked for police protection after receiving death threats.

An initial investigation showed that the welding sparks came into contact with a blowing agent or chemical used in making slippers, igniting a bigger blaze. Armamento withheld the name of the welder pending a full investigation.

Based on the investigation so far, “no one can be held liable yet,” the official said.

Kentex legal counsel Renato Paraiso said the company would welcome the investigation, but stressed that Kentex had all the necessary permits for its operations.

Factory owner Guan King Ong lost his son Tristan in the fire and suffered third-degree burns himself. Another part-owner, Heidi Pang, was among the casualties.