Searching for Dagupan ‘bangus’? Look for the tag 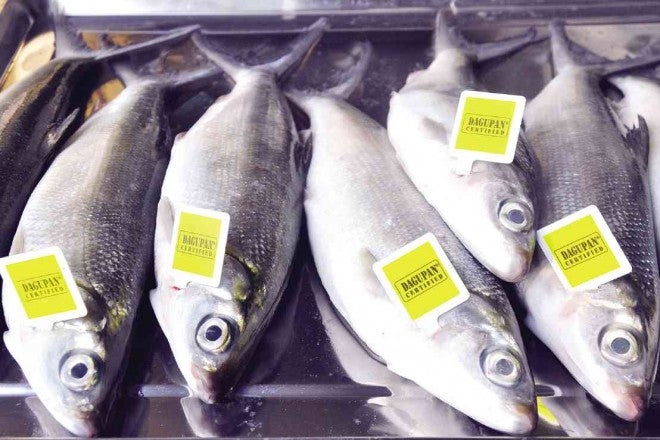 DAGUPAN CITY—Starting this week, “bangus” (milkfish) grown in ponds and cages in this coastal city in Pangasinan will carry a tag marked “Dagupan Certified” when sold in markets.

The city government started labeling bangus on Tuesday to protect the homegrown variety from traders passing on those grown in other areas as Dagupan bangus.

Bangus grown here are said to be the country’s tastiest and juiciest.

“This is a dream fulfilled for our fishermen,” said Mayor Belen Fernandez.

She said the tagging will give an added value to the city’s main produce aside from assuring consumers that they are buying the real Dagupan bangus in the market.

The city government will soon authorize dealers to sell Dagupan bangus anywhere in the country as part of the city’s marketing plan, she said.

City agriculturist Emma Molina said the tagging was implemented after the city council, through an ordinance in January, institutionalized measures for the branding of Dagupan bangus and its products.

She said this city was the first local government to tag its bangus and the first to officially recognize its local produce as Dagupan bangus.

Each bangus has a 1 inch by 1 inch yellow and white plastic tag attached to its right gill flap by a tagging gun.

The tag, Molina said, will not easily fall off because the end of a strip at the bottom of the tag is shaped like an arrow.

“It will not also be easy to put the tag manually because the gill flap is tough and it will take time to do it,” she said.

Under the ordinance, bangus growers here must register with the city government to avail themselves of the tags. About 500 operators raise bangus in more than 900 hectares of ponds in the city.

When they are registered, Molina said, they should inform her office about the date of their harvest and the number of their stock. City agriculture office personnel will then supervise the harvest and escort the boat loaded with the harvest to the fish market here.

“This is to ensure that these bangus really came from our ponds,” Molina said.

Since each tag costs only about 50 centavos, she said it will not affect the price of bangus, which sells from P90 to P110 a kilogram.

Lourdes Cayabyab, a wholesale bangus dealer in the fish market here since 1975, said she was thankful that the city started tagging the Dagupan bangus.

“Consumers all over the country always wanted to buy Dagupan bangus because of its distinct taste. But for those who are not really knowledgeable, they always have a hard time determining the real ones,” Cayabyab said. “Most of the time, they end up buying the ‘fake’ ones. But with this… I am sure more people will come to buy our bangus.” Gabriel Cardinoza, Inquirer Northern Luzon