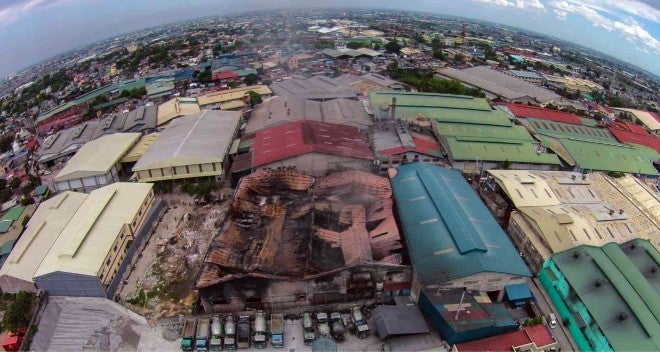 HEIGHT OF TRAGEDY The May 13 inferno that engulfed the Kentex footwear factory has left a scar of death on Valenzuela City’s industrial landscape. REM ZAMORA

Not only illegal but also immoral.

This is how Labor Secretary Rosalinda Baldoz described the owners of the Valenzuela City slipper factory gutted by a fire that claimed 72 lives Wednesday, saying they violated labor laws and standards, and illegally exploited their workers.

“They are not only illegal, they are [also] immoral. This employer (does not) have a sense of social responsibility,” the Department of Labor (DOLE) official said. “Such kind of employer (does) not have the right to engage in any business,” she added.

Citing the report of DOLE-National Capital Region Director Alex Avila, Baldoz said Kentex Manufacturing Inc., which produced cheap sandals and slippers for the local market, “has engaged and is engaging the services of an illegal subcontractor … a violation of the Labor Code.”

Local authorities said the seven-hour fire that tore through the factory was caused by welding carried out close to inflammable chemicals. The fire trapped scores of workers on the second floor, with steel bars over windows preventing their escape.

The company had provided no fire safety training to the workers, according to survivors of the blaze, as well as the victims’ relatives and unions, who also accused the company of paying salaries well below minimum wage and of withholding pensions, health benefits and other forms of social security.

Avila’s report named the subcontractor as CJC Manpower Services, with official address on MacArthur Highway, Calvario, Meycauayan, Bulacan. It is formerly known as Panday Management and Labor Consultancy, and its owner identified as a certain Cynthia Dimayuga. The operations manager is one Jojie Dimayuga.

“CJC has 104 workers deployed at Kentex at the time of the fire, with DOLE (getting) a list of these workers provided by Jinky Anne Salas, CJC human resource manager,” Avila’s report stated.

“When compared with the list of missing workers reported to Valenzuela City (social welfare department), it appeared that 36 of those missing were CJC workers deployed at Kentex,” he added.

Kentex lawyer Renato Paraiso said it was “an unfair assumption” that the company is “immoral and illegal” without knowing the facts. In fact, the lawyer said, the company has a certificate of compliance from DOLE.

In an earlier statement, Baldoz said Kentex was found to be compliant with general labor standards and occupational safety and health standards as of September 2014, for which it received a certification from DOLE. A technical inspection conducted in January 2014 found the factory’s boilers used for heating to be in satisfactory condition, she added.

But Avila said that during the time of the DOLE’s assessment in March 2014, there were no CJC workers at the factory. It appears that Kentex engaged CJC after it was jointly assessed and issued a corresponding Certificate of Compliance, he added.

“Kentex used the legitimacy of our assessment as (a) cloak to circumvent our laws. I am very much disgusted by this kind of behavior,” Baldoz said, adding that Avila’s report citing the use of piece-rate workers at the factory would also be covered in a subsequent DOLE investigation.

Baldoz said DOLE had already summoned the management of Kentex and CJC Manpower Services to a mandatory conference on Monday, May 18, to enable DOLE to ask questions related to Kentex operations, its treatment of workers, the workers’ safety and other labor issues.

The International Labor Organization (ILO) called for stronger health and safety measures in the workplace following the tragic fire in Valenzuela.

“Everyone has the right to work in a safe and healthy environment, regardless of the industry they are in or the type of work that they do,” said ILO director general Guy Ryder in a statement.

Ryder said workplaces could be made safe by improving working conditions in factories; carrying out regular inspections to ensure that they comply with structural, fire and electrical safety; and ensuring workers’ rights, especially freedom of association and collective bargaining.

A labor group, Partido Manggagawa lambasted employers for cutting corners in occupational safety to raise profits and proposed that DOLE deputize labor leaders as labor inspectors, “so that the number of inspectors and inspections can be increased several fold overnight (and) enforcement can be strengthened immediately.”

The Bukluran ng Manggagawang Pilipino (BMP) said the families of the fire victims could file a civil case to seek damages. “We should also check if safety standards were violated,” said BMP chair Leody de Guzman.

About 50 labor activists picketed the burned Kentex factory on Friday, criticizing the authorities and the factory management.

Despite the country’s strong labor laws and a vocal trade union movement, Baldoz acknowledged that poverty and the desperate search for jobs have led to the exploitation of workers in gated factories.

International organizations and foreign embassies offered sympathies to the families of the victims of the fatal fire in Valenzuela. But the European Union delegation also expressed concern about “the poor labor conditions, including the lack of proper safety standards.” With reports by Niña P. Calleja and AFP