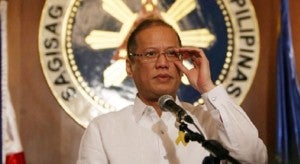 President Aquino on Thursday was all for resuming the stalled peace negotiations with the communists but the other side has to show its sincerity.

“Government is always open to talking peace. But we also need to see their sincerity,” Aquino said in an interview over Bombo Radyo.

The President said he does not want the peace negotiations to simply turn into a mechanism that would benefit only the communist insurgents and not the entire nation.

According to Aquino, shortly after the Mamasapano debacle in late January, the communist rebels began making “impossible demands” with respect to the peace negotiations. He did not elaborate.

Aquino lamented that one of the reasons for the latest termination of the talks was the contentious list that the rebels want to be given immunity and safety guarantees.

The list was submitted more than a decade ago to a third party but could no longer be verified because the diskette containing the names was corrupted.

“So now they said, they would come up with a new list,” Aquino said.

“But it seems all those on the [new] list were ones whom government has arrested. It’s like the Monopoly game where there was a ‘Get out of the jail card free.’ And if we arrest someone, the person might be included in the list and that was not what we had agreed on,” he said.

Aquino said this controversial list of consultants to be granted immunity under the Joint Agreement on Safety and Immunity Guarantees was one of the reasons given by the communists to walk out of the talks.

The President also lamented that the communists had gone back on the special track initiated by their leader, Jose Ma. Sison.

Sison’s special track proposed, among other things, focusing on discussing a cessation of hostilities. The peace talks under the special track would not include a panel-to-panel negotiation but would involve only the panel chairs and other personalities. But the special track was not implemented because of disagreements between the two parties.

Last week, top leaders of the communist National Democratic Front (NDF) were arraigned for multiple murder charges stemming from the alleged purging of hundreds of rebels suspected to be government spies in Inopacan, Leyte, in the 1980s.

Secretary Teresita Deles, the presidential adviser on the peace process, earlier said that the arraignment of the NDF leaders should not affect the stalled peace talks.

“The important thing is that if the table opens and there is still progress on it, certainly we can do problem solving on this matter,” Deles said.

The Communist Party of the Philippines and its armed group, the New People’s Army, and political arm, the NDF, also accuse the government of insincerity, for continuing with its counterinsurgency programs that the communists alleged have led to human rights violations by the military and the police.