Oxalic acid ‘can be mistaken for sugar,’ but Manila ban not easy 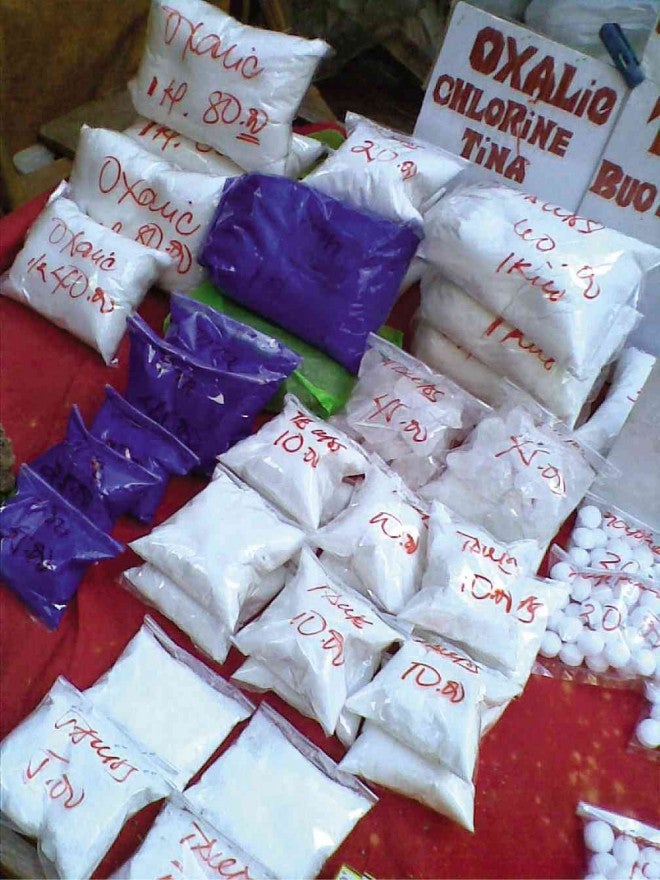 PLASTIC packs of oxalic acid are sold among other sidewalk merchandise in Divisoria. Photo from EcoWaste Coalition

Manila’s chief health officer said a proposal to impose a local ban on oxalic acid—the substance found in the bodies of the two victims of apparent milk tea poisoning last month—needs careful study as the city could not just outlaw a chemical with industrial and household uses.

Dr. Benjamin Yson was reacting to a clamor from the environmental watchdog EcoWaste Coalition, which noted how the white powdery substance, which can be easily mistaken for sugar or salt, is being sold even by street vendors in plastic packets without any warnings about its toxicity.

“We can limit its unauthorized retail (sale), especially among ambulant vendors, but not for wholesale or industrial uses,” Yson said, adding that the city would need local council legislation for that to happen. “We have an ordinance only against the sale of silver cleaners with cyanide.”

Oxalic acid may be used as a cleaner or bleaching agent. Citing toxicology tests, the Manila Police District recently disclosed that the substance was ingested by William Abrigo, owner of Ergo Cha milk tea shop in Sampaloc, and his customer Suzaine Dagohoy in the April 9 incident that later led to the filing of murder complaints against Abrigo’s son Lloyd.

The MPD considered the younger Abrigo a suspect based on his activities at the shop the night before the two victims fell ill and shortly after Lloyd learned that his father was brought to the hospital. Lloyd and his widowed mother have denied the charges in the media through a family lawyer.

The Philippine National Police said it would only take 40 milligrams or roughly three to four tablespoons of oxalic acid to cause a person’s death. According to the US-based National Institutes of Health, ingesting a significant amount of the acid can immediately cause abdominal pain, collapse, convulsions and shock.

“Oxalic acid, as far as we know, is allowed for industrial applications and should not be sold to unauthorized users and much more sold on the streets by ambulant vendors,” said EcoWaste coordinator Thony Dizon.

Dizon said his group found vendors in Divisoria selling the substance in transparent plastic bags with nothing but “Oxalic” written on them. A 1-kilo pack costs P80, while smaller packs sell for P10 or P20 each.

“It looks similar to iodized salt or refined sugar that food preparers can use by mistake, especially if improperly stored,” he added.

EcoWaste said the Manila milk tea shop incident was not the first recorded case of oxalic acid poisoning in the country. In 2011, two pupils at Larion Bajo Elementary School in Tuguegarao City were killed and 44 others were hospitalized after eating oxalic acid-laced pansit, it said.

Read Next
Kidnaps linked to 2016 polls as teacher is released by Abu Sayyaf
EDITORS' PICK
Acer starts the year off strong with the Aspire Vero National Geographic Edition
4.7 million Filipinos have received booster shots, but that’s still a ‘low’ number – Galvez
Over 3 Million worth of prizes to be won at Smart Padala’s SENDali Manalo Promo!
‘Not yet the end’: Lawyer says Marcos Jr’s DQ cases to take lengthy process
Omicron now shows up in 90% of samples sequenced – Duque
The best of bayside and city living at SMDC’s Sail Residences
MOST READ
Duterte asks: ‘Is COVID-19 airborne?’ Duque blames spread on ‘token compliance’ with rules
Marcos Jr. visits Cebu, stands as ‘ninong’ to mayor’s son
‘Not yet the end’: Lawyer says Marcos Jr’s DQ cases to traverse lengthy process
Morissette Amon recovering after confinement for diverticulitis, tests positive for COVID-19
Don't miss out on the latest news and information.