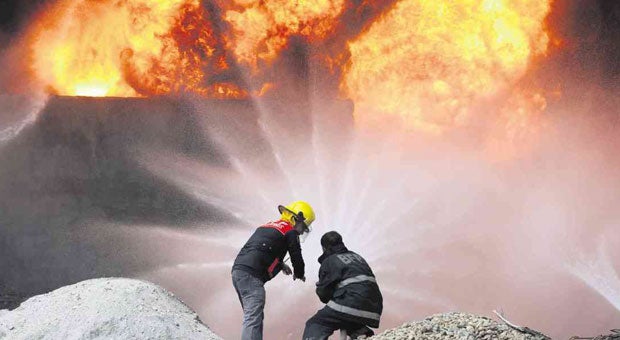 DEADLY INFERNO Two firemen struggle to put out a big fire on Wednesday in a slipper factory in Barangay Ugong, Valenzuela City, using a fogging technique. The fire, which raged for seven hours, left at least 35 factory workers dead who were trapped inside the mall-sized concrete factory building. More than 40 to 65 others were missing at press time and feared dead. LYN RILLON

Janie Basinang screamed as she rushed to the entrance of the burning rubber slippers factory in Valenzuela City to plead with firefighters to save her 27-year-old daughter, Mary Ann Icuspit.

“My daughter’s coworker sent a text message that they were trapped on the second floor,” Basinang shouted while running toward Kentex Manufacturing Inc., two hours after the fire broke out at 11:28 a.m.

But firefighters prevented her from going inside the factory on Tatalon Street in Barangay (village) Ugong, as the blaze raged and black smoke swallowed the main entrance door. The 3,000-square-meter, two-story building, which was as large as a town shopping mall, had two entrances.

Officials confirmed Wednesday night that at least 35 people were killed, while dozens were still trapped in the building and feared dead after the seven-hour fire. Property damage was placed at some P50 million.

Earlier, at least 65 people were reported missing by their relatives to the city’s help desk, Mayor Rexlon Gatchalian said, adding that fire officials had informed him that there were no survivors in the building after the fire was placed under control.

“More or less 35 died,” said Supt. Crisfo Diaz, deputy director for operations of the Bureau of Fire Protection (BFP) in the National Capital Region (NCR). “They died due to suffocation [and] they were burned as fire gutted the structure,” Diaz said.

Gatchalian quoted investigators as saying the fire could have been ignited by sparks from a welding job being undertaken at one of the main doors. Sparks came in contact with a blowing agent used in making slippers, starting the fire.

Senior Supt. Sergio Soriano, fire director in the NCR, said the bodies of three people had been found on the stairs, as they were attempting to escape. He identified two of the victims as Tristan King Ong and Heidi Pang, owners of the factory.

“We are still hoping that of the 65, some were able to escape,” the mayor said. But around 4:45 p.m., he quoted the BFP as saying, “No one inside the factory survived.”

District Fire Marshal Wilberto Rico Neil Kwan Tiu said he was among the first to reach the second floor of the gutted building after the fire and saw “numerous bodies,” many charred beyond recognition.

“I’m not sure if my daughter is one of them but I hope she’s alive,” Basinang said, trying to hold back tears.

Families and relatives of factory workers waited outside the factory, hoping that their loved ones would come out of the factory alive.

A woman in her late 50s asked workers who managed to get out if they had seen a woman named Leah. But no one could tell her whether Leah, possibly a secretary at the factory, was able to escape.

At the entrance of the factory, the burned body of a woman lay near the stairs. She had reached about 2 meters near the door when the fire engulfed her.

Soriano said the building had a fire exit and that 10 factory workers managed to escape through the staircase.

The workers were trapped because the fire originating from the front door spread rapidly. Some on the second floor were seen waving their hands to people below; others jumped out the windows, Soriano said.

Those on the first floor escaped through the other door, he said.

“Some tried to put out the fire, but it spread fast,” Parales said.

One of the owners, Veato Ang, said he was at the office when the fire started and that one of the supervisors pulled him out of his desk to escape.

“In just a matter of minutes, the fire spread throughout the building,” Ang said.

He said the company would help the families of the victims.

“We will do everything to assist them. We are also sad,” Ang said.

The company will shoulder the medical and other expenses of the victims, according to its lawyer, Renato Paraiso.–With reports from AFP and AP

31 bodies recovered from factory gutted by fire in Valenzuela City