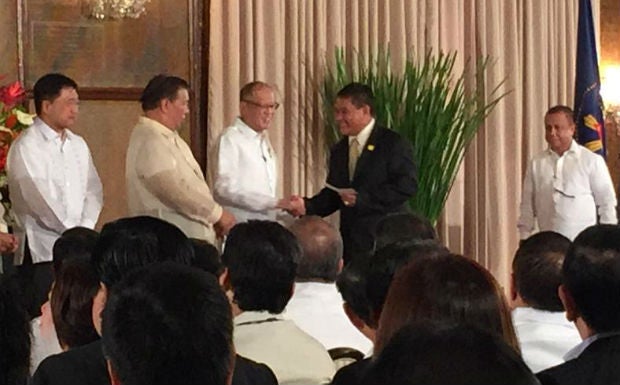 Government-owned and -controlled corporations (GOCCs) on Wednesday morning handed over P36.86 billion worth of checks to President Benigno Aquino III during the annual ceremonial turnover of dividends.

Forty-eight GOCCs participated in the ceremony held at Rizal Hall in Malacañang.

Aquino congratulated the GOCCs, saying, “We really should applaud each one of you who helped in the reforms, which shows what could have happened if we started earlier.”

The Governance Commission on GOCCs (GCG) said “GOCC Day” is being celebrated yearly in “recognition of GOCCs’ achievements and their significant contributions to the country’s national development.”

A total of P131.28 billion have been remitted by GOCCs under Aquino’s administration (2010-2015). Meanwhile, P84.18 billion in remittances were collected from 2001 to 2009 under former President Gloria Macapagal-Arroyo.

“My appeal: Let us not stop; let us not be content with what we have achieved; let’s think of more ways to further improve benefits and services for the people,” Aquino said.

Of the GOCCs, the Land Bank of the Philippines had the highest dividends at P6.254 billion. The Philippine Amusement and Gaming Corp. (Pagcor), on the other hand, posted the largest amount of remittances (including dividends) at P10.137 billion.

GOCCs are required by Republic Act No. 7656 to remit at least 50 percent of their income as dividends to the national government.

Other remittances include proceeds of sale of assets and income from various fees.

GCG chair Cesar Villanueva said various structural reforms have been implemented, including a “no gift policy.”

He said the GCG also aimed to encourage whistle-blowers or those willing to expose illegal and dishonest acts by requiring each GOCC to adopt its own whistle-blowing program. IDL/RC