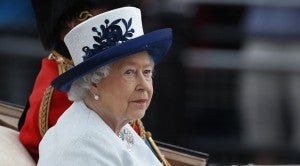 LONDON–Britain’s Queen Elizabeth II has expressed her happiness at the arrival of a new great-granddaughter, Princess Charlotte, born to Prince William and his wife Kate this month.

Guests at a garden party on the lawns of Buckingham Palace on Tuesday said that the queen had spoken of her delight at the new addition to the royal family, who is fourth in line to the throne.

“I told her I am so happy at the arrival of the new baby. I said congratulations, and she said ‘Yes, we love to have another girl’, said garden party guest Susan Pollack, 84, a Holocaust survivor who works with a charity patronized by the queen.

“She said how pleased she was to have another great-granddaughter in particular,” said Pollack’s daughter Sandra Gee, 53.

The queen, 89, was dressed in a light yellow hat and summer coat as she and her husband Prince Philip mingled with Prince Charles, his wife Camilla, Britain’s Prince Edward, Earl of Wessex, and Sophie, his wife.

Born on May 2, Princess Charlotte is the second child of Prince William and Kate after their son, Prince George, who was born in 2013.

The family are currently taking some time out after the birth at their 10-room private country residence of Anmer Hall, located on the queen’s Sandringham Estate in Norfolk in eastern England.