Intalan’s “Dementia,” and Jun Robles Lana’s “Bwakaw” and “Barber’s Tales” as a fundraiser, his way of paying it forward to the city’s Holy Angel University (HAU), his alma mater.

As a distributor and producer of films, Lapuz helped put the Philippines back in the limelight in Cannes and several international festivals, with the films shown there earning awards for their directors and actors.

“You’re just in Grade 8 and you’re already helping your fellow youth,” Maria Theresa Fajardo, head of HAU’s scholarship and grants program, told the students who came to the screening of “Ekstra,” where 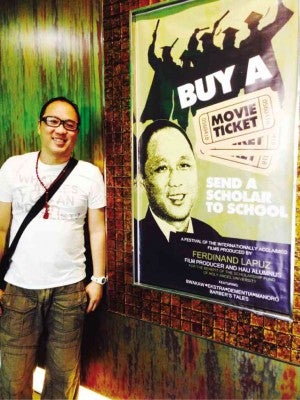 LAPUZ stands beside a poster of the recent film festival that raised P300,000 for scholarships.

A recent screening had a very excitable audience. They clapped when the soundtrack began, shrieked when the opening credits listed the names of actors and grew silent when the movie began.

For the P50 they paid, the audience was not just entertained by the films they watched but received words of inspiration, too.

“Poverty is not a hindrance,” said Lapuz who coproduced the five films.

He said he financed the last two years of his Business Management course at HAU by working at a Dunkin’ Donuts in what was then Mabalacat town, now city, in Pampanga.

Lapuz said his own life was one for the movies.

He told the audience he developed a love for films when he was in first year high school. Back then, there were only seven movie houses in Angeles City and novelas were regular materials in comic books.

He started by being a “mangarter,” one who viewed posters (made of coco cloth). He then hopped from one movie house to another, watching films about three times, starting with the first movie he got the chance to see, “Karinyosa,” which coincidentally starred Santos.

Through an aunt, he left for Toronto, Canada, in 1990 to help his father support a brood of five. In between working as a purchasing agent for an import company, Lapuz watched Philippine movies on video. Septembers were reserved for the Toronto International Film Festival (TIFF).

A call from a friend, the late Ariel Punzalan, tipped him off to the showing of “Sibak”—directed by Mel Chionglo, written by Ricky Lee and produced by Richard “Ado” Tang—at the TIFF.

The movie renewed his interest in Philippine show biz. Since then, he has been assisting Philippine delegations to the TIFF. Too smitten by the Philippine entertainment industry, he returned to the country in December 1995 in hopes of renewing his career in the movies.

But in 2002 he had to return to Canada. Ed Instrella, manager of Cherry Pie Picache, urged him to watch Maryo de los Reyes’ “Magnifico.”

Lapuz pitched the movie in the Berlin festival in September 2004, where it won the Crystal Bear Award and Grand Prix Jury Award.

Mendoza would win the best director award in Cannes in 2009 for “Kinatay.”

With help from international producers Didier Costet and Christian Jeune, Lapuz’s winning streak in international festivals continued and he was happy at how it had created ripples in the local movie industry.

“I wasn’t academically trained as a producer. I think I manage to be good at it by being able to relate to everybody in the production. A producer’s work is not materially rewarding but since I wanted to help, we thought of showing the films I produced to raise money to support poor students who value education as a way out of poverty,” Lapuz said.

Read Next
In the basement: Love and then some
EDITORS' PICK
TeaM Energy pushes development programs to help in pandemic rebound
Piolo Pascual: The Ultimate Heartthrob continues to level up
Vaccine supply is ‘biggest problem,’ Binay says after Duterte’s threat to arrest vaccine ‘skeptics’
Pangilinan says science-based solution is needed vs COVID, not fear based or arrest
Want to help local farmers? Shop small and eat Real Food
Vaccine profits: Making a killing from a killer virus
MOST READ
Duterte-Duterte tandem possible but ‘winnability is another question’ — Binay
Vaccine profits: Making a killing from a killer virus
Sharon Cuneta on living in the US: ‘Nagagawa ko lahat ng normal na bagay’
Pangilinan says LP making efforts to reach out to Lacson, Isko, others
Don't miss out on the latest news and information.