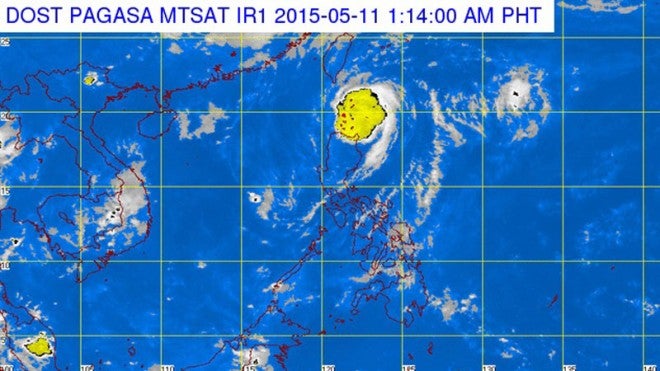 The weather bureau said the howler, internationally named “Noul,” had become a “Category 4 storm”—strongest to hit the country since a similar powerful cyclone struck the Visayas in November 2013 and left more than 7,000 people dead or missing.

Packing peak winds of up to 185 kilometers per hour with gusts of up to 220 kph, Dodong struck the eastern coastal town of Santa Ana around 4 p.m. Sunday and was moving northwest at 17 kph, slower than

20 kph when it came ashore.

An ANC TV reporter in the town of Gonzaga said powerful winds toppled trees and power lines in the area.

“We strongly advise preemptive evacuation while we still have time, and we expect that there will be a confluence of events—a high tide, heavy rainfall in the mountains, the possibility of a storm surge and strong winds,” said Alexander Pama, head of the National Disaster Risk Reduction and Management Council (NDRRMC).

There were no immediate reports of casualties from Dodong, which hit Pananapan Point in Santa Ana at 5 p.m., the weather bureau said.

“We have experienced many typhoons in recent years but this one looks strong indeed,” said Councilor Marciano Agunoy Jr. of Barangay (village) Casambalangan.

An undetermined number of families sought refuge at Casambalangan’s elementary school, while others were taken to the gymnasium at the town proper, about 13 kilometers away.

A still unidentified resident, who suffered a stroke as the typhoon started to batter the town on Sunday, had to be taken to a hospital on board a dump truck, as smaller vehicles could not withstand the strong winds, Agunoy said.

Albert Balajadia, a civil defense officer, said that while the people of Santa Ana were used to many typhoons that hit them yearly, this time, they took government warnings seriously.

Power was cut off by Cagayan Electric Cooperative at 3:30 p.m. as a precaution, Balajadia said. Telecommunications, however, remained intact.

Despite the power outage, the casino complexes and other facilities at the Cagayan Special Economic Zone and Freeport remained operational with the use of power generator sets, said its officer in charge, Julian Jovy Gonzales.

“We are also confident that there will be no interruption of the online gaming operations as our fiber optic telecommunications infrastructure is underground,” Gonzales said.

Rain gauges in Santa Ana showed that the town recorded heavy rainfall starting 2 p.m., which could be good news to farmers there, according to forecasters at the Philippine Atmospheric, Geophysical and Astronomical Services Administration (Pagasa). Rain volume was 14.9 millimeters from 2 to 3 p.m. on Sunday.

“This typhoon hopefully will instead bring blessings to our farmers. We just hope it will not cause further damage,” said weather specialist Antonio Pagalilauan.

In nearby Gonzaga, some 250 people were taken to evacuation centers in Caroan village on Sunday afternoon, said Milagros Talosig of the Office of Civil Defense (OCD).

In this capital city of Cagayan province, morning showers turned into strong rain at noon, prompting several business establishments to close to prepare for the typhoon.

More than 2,000 people were being evacuated in Cagayan as the typhoon approached, according to the OCD’s Norma Talosig. Around 1,200 people fled to high ground in Isabela province.

Isabela Gov. Faustino Dy III said residents in the coastal towns of Palanan, Divilacan, Maconacon and Dinapigue and in the landslide-prone towns of Benito Soliven, San Mariano, Cabagan and Santa Maria left their houses to stay in evacuation centers.

The Department of Social Welfare and Development (DSWD) said in Manila it had prepared 26,729 family food packs in anticipation of the typhoon.

“The field office is on alert with its quick response team ready to be deployed to assist local government units in disaster operations and management of evacuation centers,” Soliman said.

The DSWD field office in Cagayan is also repacking family food packs, which include 2,373 sacks of rice and 2,021 boxes of canned goods.

Soliman also ordered the deployment of additional personnel at the National Resource Operations Center (NROC) in Pasay City to help in the overall disaster management and response.

Relief items are continuously being repacked by volunteers at the NROC, mostly from Hewlett Packard Philippines and from the Philippine Navy.

Six domestic flights were canceled on Sunday, local airlines reported. More than 10,000 passengers and more than 1,000 shipping vessels were stranded in various ports in the country.

Typhoon ‘Dodong’ weakens as it moves out of PH