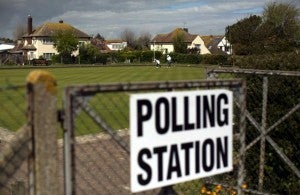 People play bowls by a polling station sign at Birchington Bowls Club in Birchington, south east England, Thursday, May 7, 2015. Polls have opened in Britain’s national election, a contest that is expected to produce an ambiguous result, a period of frantic political horse-trading and a bout of national soul-searching. AP

LONDON — Alan Mak, a former corporate lawyer whose parents emigrated to Britain from southern China, became the first ethnic-Chinese person to be elected to the House of Commons on Friday.

Cambridge-educated Mak, 31, comfortably won the constituency of Havant in southern England for the Conservatives, taking more than 51 percent of the votes cast, according to results from Thursday’s general election.

“I’m honored and delighted to be elected the new member of parliament for Havant,” Mak said in comments published by the Portsmouth News website.

“We had a really strong campaign with lots of support from residents on the doorstep. I’m looking forward to working hard to support everyone in this constituency.”

Mak’s father emigrated to Britain in the 1960s and his mother moved to the country afterwards.

Both were from Guangdong province in southern China, neighboring Hong Kong, he said in an interview with a magazine covering British-Chinese issues.

The couple ran a small takeaway restaurant in the northern city of York, where the newly elected lawmaker was born.

Mak has played down the political impact of his ethnic roots in recent interviews.

“I certainly have no interest in what people in Hong Kong or China think of me, because I am not representing them,” he told Hong Kong’s South China Morning Post this month.

“I am representing the people of Havant.”

The SCMP said Mak was one of 11 ethnic-Chinese candidates vying for seats in parliament, and was the only one elected so far.

Just under one percent of Britain’s population is ethnic-Chinese, according to the country’s 2011 census.