1,100 evacuated in Sorsogon due to Bulusan explosion 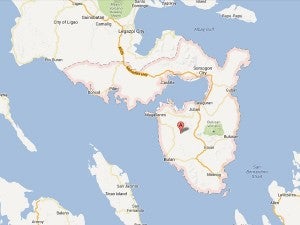 Raden Dimaano, head of the Sorsogon PDRRMO, said the affected persons from 210 families were evacuated past 8 a.m. today from the village of Cogon, which was affected by the ash fall spewed by Bulusan Volcano Wednesday night.

The evacuated families were brought to the Gallanosa National High School in Barangay (village) San Pedro of the same town.

Cogon is within the volcano’s 4-kilometer-radius permanent danger zone which also covers the villages of Bolos, Tinampo and Monbon, which are all part of the southwest quadrant of the volcano, said Dimaano.

“Out of the four villages, Cogon is the most affected because of the wind direction. The evacuation efforts is in consonance with our critical preparedness because of the expected rainfall due to typhoon Dodong that would cause stream and lahar flow in the valleys and along river or stream channels. We are expecting heavy rainfall tomorrow,” he said.

Dimaano said the evacuation area is 9 kilometers away from the volcano.

He said there were no traces of ash in the nearby towns surrounding the volcano such as Juban, Casiguran, Gubat, Barcelona and Bulusan.

Phivolcs Director Renato Solidum said alert level 1 means that the volcano was in an abnormal state or might go into more steam-driven eruptions.

In its latest bulletin, the Phivolcs said that at 9:46 p.m. of May 6, the volcano generated a steam-driven explosion from a vent on its northwest upper slopes that propelled an ash plume approximately 250 meter high, which lasted 3.5 minutes.

It was the second ash explosion this week. The volcano also spewed ash on May 1, rising over 200 meters and lasting 5 minutes.