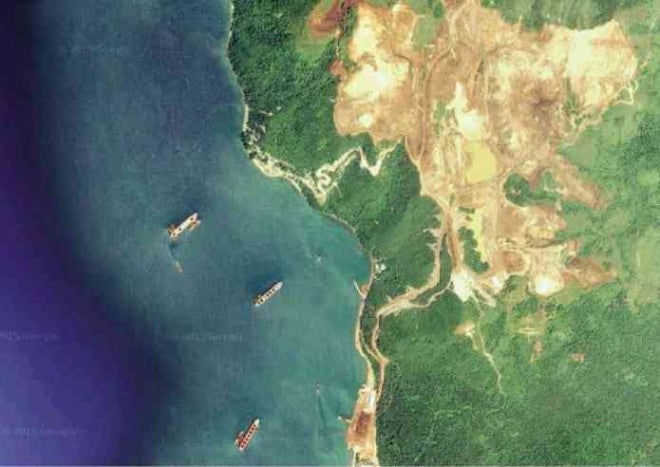 A GOOGLE map shows the area of operation, supposedly small scale, of SR Metals Inc. in the village of La Fraternidad in the town of Tubay, Agusan del Sur province. FROM GOOGLE.COM

SURIGAO CITY—Government records showed that nearly 2 million metric tons of nickel ore worth billions of pesos was extracted by a controversial mining firm in Tubay, Agusan del Norte province, whose politically connected owners are being publicly accused of plunder but have not been formally charged or investigated.

SR Metals Inc. (SRMI) and its subsidiary firms, San R Mining and Galeo Equipment and Mining Corp., shipped some 1.8 million MT of nickel from August 2006 to September 2007, according to records obtained by the Inquirer from the Philippine Ports Authority and the Mines and Geosciences Bureau.

The figure, critics said, represented a colossal disparity with what SRMI and its sister companies—then operating as small-scale mines—were allowed to extract and sell: 50,000 MT each per year, or 150,000 MT combined annual output for the three firms.

But after years of litigation and what many perceived as a slap-on-the-wrist penalty, SRMI paid P7 million in fines for over-extraction in 2007. No government agency has yet taken SRMI and its sister companies to court for the massive shipment of ore, which amounted roughly to P28 billion.

Reached for comment, SRMI vice president for public and media affairs Ryan Anthony Culima said the company would respond to “these issues” at an appropriate time.

Last year, the Supreme Court rejected SRMI’s interpretation of the ore extraction limit. SRMI insisted that the 50,000-MT limit pertained to nickel and cobalt minerals in their purest form and excluded soil and other materials.

Upholding an earlier decision by the Court of Appeals (CA), the high court described SRMI’s interpretation as destructive to the environment.

Lawyer Elvin Grana, a legal counsel for a Butuan City-based businessman who is suing SRMI for a separate case involving royalty payments, said the Supreme Court ruling became final last month when the high court issued an entry of judgment.

“For all intents and purposes, the Supreme Court has decided on this case with finality,” Grana told the Inquirer on the phone from his office in Manila. “What’s lacking here is making SRMI accountable.”

Grana recalled that his client, Rodney Basiana, had filed a case in the Ombudsman seeking an investigation into SRMI and its owners for plunder. Filed in late 2006, he said, the case was shelved by the Ombudsman because the Department of Justice (DOJ) then issued a legal opinion favoring SRMI’s interpretation of the ore extraction limit.

Reached for comment, Basiana, who asserts that SRMI owes him more than P1 billion in royalties being the original claimant of the SRMI mine site, said the recent Supreme Court decision should pave the way for the Ombudsman to resume its investigation into SRMI.

Rev. Peter Vargas, coconvenor of environment group Caraga Watch, said they were willing to intervene in the SRMI case as interested parties “if no one dares to confront this powerful mining company.”

But Vargas and Basiana, the businessman, admitted that taking on SRMI was an uphill battle, noting that the company’s owners were known supporters of the ruling Liberal Party (LP).

“I am now starting to believe the boast of Mr. Eric Gutierrez that he is malakas with the Liberal Party, particularly with Secretary Mar Roxas,” Basiana said. “Or is it that Erice is an influential member of the LP?”

Basiana was referring to SRMI chief executive officer Francis Enrico “Eric” Gutierrez and Caloocan Rep. Edgar Erice—an LP stalwart—who was listed as the firm’s president when the plunder complaint was filed. Erice has said he had divested himself of his shares in the company.

Former SRMI employees said Gutierrez bankrolled President Aquino’s 2010 campaign in Northern Mindanao, and was appointed LP head in Caraga Region for a time. Gutierrez was also described in media reports as the owner of the helicopter used to take pictures of the so-called “Hacienda Binay” of Vice President Jejomar Binay.

Vargas of Caraga Watch said the connections were too glaring to ignore.

“Nothing has been done. Is it because the owners are closely affiliated with the Liberal Party?” Vargas said.