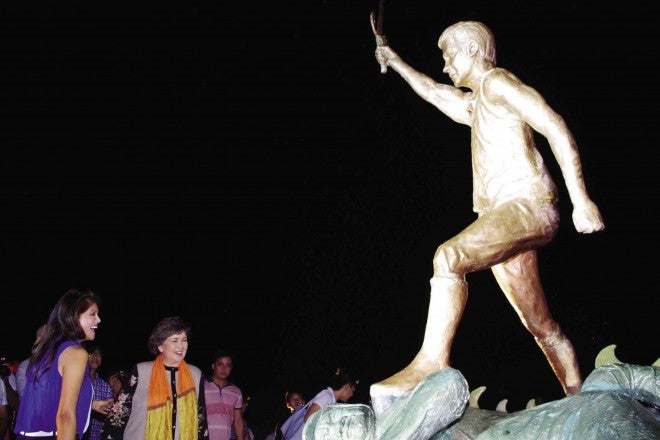 ACTRESS Susan Roces (right) and Ilocos Norte Gov. Imee Marcos lead the unveiling of a statue of the late actor Fernando Poe Jr., as the character “Ang Panday” (The Blacksmith), in the sand dunes of Paoay where the film was shot in the 1980s. COURTESY OF ALARIC YANOS / ILOCOS NORTE COMMUNICATION
AND MEDIA OFFICE

DESPITE their distinction as a national geological monument, the sand dunes of Paoay town in Ilocos Norte have always been barren and unproductive. Until filmmakers discovered the landscape’s unique appeal that was perfect for many a cinematic gems.

That’s what the Ilocos Norte government wanted to highlight when it unveiled on May 1 a fiberglass statue of the late actor, Fernando Poe Jr., the “King of Philippine Movies,” at the dunes for the annual Himala sa Buhangin (Miracle in the Sand) Festival.

It joins another statue, the image of actress Nora Aunor, the “superstar” of Filipino films, as her character “Elsa” in the award-winning classic, “Himala” (Miracle), which was also filmed in Paoay and had inspired the festival.

Artist Raphael David immortalized Poe’s iconic fantasy character, “Ang Panday” (The Blacksmith), with a monument that depicts the Filipino superhero thrusting his sword at an enemy.

The Panday franchise, composed of the 1980 film and its three sequels, was all shot on location at the dunes, also known as the La Paz sand dunes.

“Ang Panday” is a fictional comics character created by writer Carlo J. Caparas and artist Steve Gan that had been serialized in the 1970s. In the film, Poe played “Flavio,” a blacksmith who forged a meteorite ore into a dagger, which magically turns into a sword.

Facing the West Philippine Sea, the dunes have been formed by nature through wind, waves and shore currents. Stretching about

40 kilometers from Currimao town to

Pasuquin town, the sand dunes have been declared a national geological monument by the National Committee on Geological Sciences (NCGS).

The unique features of the area have also attracted adventure-seekers, who engage in extreme sports activities like off-road driving and sand boarding. The dunes have also become a venue for outdoor music and arts shows.

“As a kid, I used to watch [television shows featuring] superheroes and cartoons. Panday was sort of a live action take on the superhero genre,” said David.

Actress Susan Roces was thankful for the honor given by the provincial government and local artists to her late husband, who was a prolific actor, director, producer and film archivist.

She said her visit to Paoay was a “sentimental journey” that brought back memories of Poe who, she noted, had been inspired to shoot movies in Ilocos Norte not only because of its natural beauty but more importantly because of the warmth of its people.

“We are blessed with so much that is natural. We must credit the people of Ilocos Norte for preserving their natural attractions and cultural heritage,” she said.

“My husband was so inspired that he

always returned to the province because [Ilocanos] are cooperative and sincere,” she added.

With the success of the “Ang Panday” movies and the discovery of Ilocos Norte as an ideal film location, Gov. Imee Marcos said local and international film crews came to the province to shoot. This prompted the provincial government to create a media incentives desk, under the province’s communication and media office, two years ago.

“For us, film is not just a hobby; it’s a livelihood needed by many Ilocanos. Many people earn through this industry—those employed as production crew members, carpenters who are being trained to become set designers and people who get to act as bit players,” Marcos said.

“Suddenly It’s Magic,” a film produced by Star Cinema in 2012, was shot in the towns of Paoay, Burgos and Pagudpud.

“The publicity and the exposure we get from these movies have resulted in savings for advertisement [to promote local] tourism,” Marcos said.