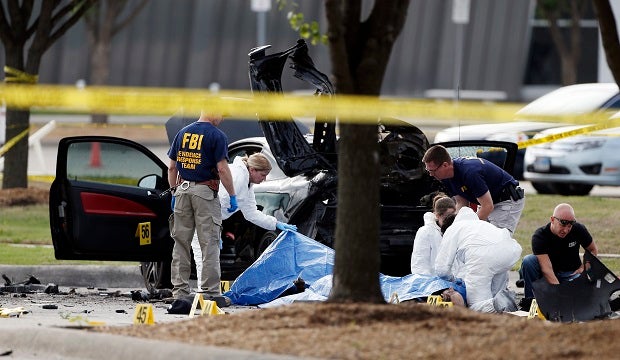 FBI crime scene investigators document the area around two deceased gunmen and their vehicle outside the Curtis Culwell Center in Garland, Texas, Monday, May 4, 2015. Police shot and killed the men after they opened fire on a security officer outside the suburban Dallas venue, which was hosting provocative contest for Prophet Muhammad cartoons Sunday night. AP

GARLAND, United States – The two gunmen shot dead when they attempted to storm a cartoon exhibition on Islam’s prophet Muhammad have been identified as roommates from Arizona, one of them a suspected jihadist, reports said Monday.

Several US media identified the shooters — killed by police Sunday in Garland, Texas outside the event — as 31-year-old Elton Simpson and 34-year-old Nadir Soofi.

According to a detailed account in The Los Angeles Times, the pair shared an apartment in the city of Phoenix. CNN broadcast footage of FBI agents raiding the alleged address.

In court records seen by AFP, in 2011 Simpson was sentenced to three years’ probation for lying to federal agents investigating his alleged jihadist sympathies.

FBI agents presented the court with taped conversations between an informant and Simpson, discussing travelling to Somalia to join “their brothers” waging holy war.

The prosecution was not able to prove that he had committed a terrorist offense, but did establish he had lied to investigators when he denied having discussed going to Somalia.

Private terror watchdog SITE said that at least one Twitter account linked to a known militant of the Islamic State jihadist group has claimed the attackers as sympathizers.