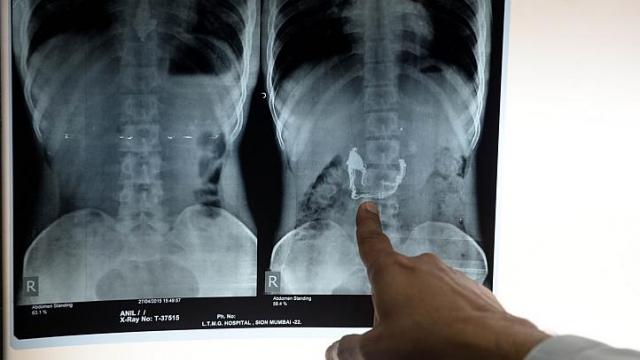 Lokmanya Tilak Medical College and Hospital dean Suleman Merchant pointing to an xray showing a necklace and pendant inside the stomach of alleged thief Anil Jhadav. Jhadav has been put on a special diet of bananas and special liquids by police to help him expel a stolen gold necklace. AFP

DELHI – An Indian man has been put on a special diet of bananas and special liquids by police to help him expel a stolen gold necklace.

Anil Jadhav, 30, was arrested on Monday after members of the public accused him of snatching the 63,000 rupee (S$1,316) necklace from a 52-year-old woman in Mumbai’s Sion area.

According to the BBC, an initial body search by police failed to retrieve the necklace which weighed 25g.

But it was found lodged in his food pipe during X-ray scans of Mr Jadhav’s body.

Police then put him on the special diet of bananas and liquids.

“We searched him thoroughly in the police station but did not find the necklace. Then some people who had caught him told us that they had seen him swallowing something,” police official Rahul Pawar was quoted telling the BBC.

Mr Jadhav has defecated it after he was fed special liquids and bananas, and had four enemas administered to him by doctors. The necklace has since been returned to its owner.

However, owner Rajashree Mayeker told Midday newspaper correspondent Saurabh Vaktania that she has refused to wear it and was having it melted to re-make it.

The special diet is not the first time that the method is being used by Indian police on a robber.

In 2007, police forced a thief to gobble down 40 bananas in a few hours, in order to pass out a gold necklace that he had snatched and swallowed. The necklace was then washed and returned to the woman who owned it.

Last year, a man in Mumbai was also fed 36 bananas so that police could retrieve stolen property.

Read Next
Aquino names PCGG chair Bautista as new Comelec chief
EDITORS' PICK
On Day 2 of implementation, gov’t says workers now exempt from ‘no vax, no ride’ policy
Gear up and get ready to play with Yamaha Mio Gear
DOH: 28,471 new COVID-19 cases in PH; active cases now 284,458
Metro Manila posts lowest temperature yet this ‘amihan’ season at 19°C
Over 3 Million worth of prizes to be won at Smart Padala’s SENDali Manalo Promo!
Acer starts the year off strong with the Aspire Vero National Geographic Edition
MOST READ
Emma Stone calls Andrew Garfield a ‘jerk’ after he ‘lied’ about his ‘Spider-Man: No Way Home’ appearance
LOOK: Edu Manzano, Cherry Pie Picache enjoy Palawan with her son Nio Tria
Unvaccinated has rights but it has limits—DOJ
Retirements prompting major reshuffle in PH military
Don't miss out on the latest news and information.